Some of my best friends...

Are furry! Because I don't talk about them enough, I thought it was time. After losing Lord Greystoke, I realized I need to show my family off a little more.

WOLFDANCER has the prettiest green eyes and when he first opened them, he saw me. This little man is lucky. Found him 17 years ago baying at the moon, eyes not open, no fur, bug infested, and he fit in the palm of my hand. Vet said he wouldn't make it through the night. Welll, the cat with the prettiest green eyes in the world got another lease on life and has had a wonderful 17 years in my car. Wolf is so loving and he really believes he's a person who is just very hairy. 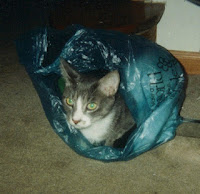 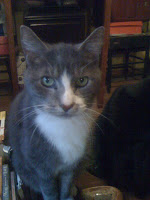 My JEWELEYE. I call her Jewely. Turned up pregnant on my porch in October 2007. She was approximately 6 months old according to the vet and she had a hideous black casing over her left eye which, after surgery, proved to be caused by a BB shot in her eye. If ever I found the son of a bitch who did that - I'd shoot them in the eye. Feel like that's only fair, To keep it comparable, I'd use a 22 caliber pistol. A second surgery was performed to remove eye ball as it kept getting infected and she's been mine ever since. She's loving but she can be a snot when she wants to. Pics don't show it but her fur is tortoise--beautiful black, red, tan mottling. 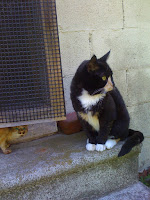 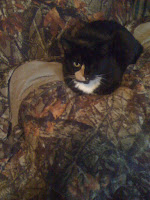 The new big guy in the house, NIGHTSHADE. Badass. Full of piss and vinegar. He chases a big white shepherd every time the owner lets him out. His tail grows 10 times bigger, he spits, and literally, goes after the damn dog! I've seen him launch from the neighbors picnic bench toward this dog and I hold my breath--for the dog's safety!! He can be loving, and he can be a real animal. This cat's soul imagines it is in a panther's body! 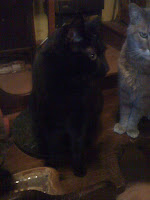 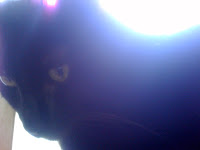 Last, but by far not the least, SQUIRREL. She's as much of a spitfire as her mother was and she was one of the feistiest cats I'd ever come across in my life! Her mom got hit by a car shortly after having her and tiny and full of might, she found her way to my back door weeks later, starving, puny as hell and pregnant. She lost her two kits right after birth as she was only about 5-6 months old and had no idea what to do. Yeah, I took her in and I've never regretted a single moment of it. She is full of love, always perky and happy. 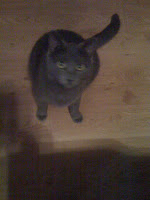 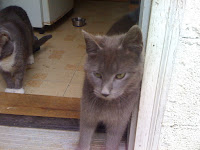 Growl and roar-it's okay to let the beast out. - J. Hali Steele
Posted by J Hali Steele at 2:59 PM