Purple Prose Gets a New Meaning 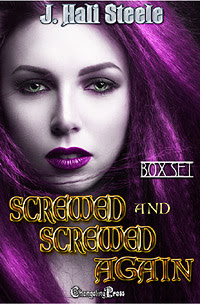 Apparently a customer who’d attended a convention in town had paid a visit to the Mons Venus the night before for some much needed diversion. He’d had his wallet lifted while watching some of the ladies pole dance. The wallet was full of traveler’s checks and credit cards, and Purp felt sure there would be pictures of the wife and kids. She figured he got what he deserved, but that wasn’t her call. The club’s manager didn’t want any trouble. He bought some time by promising the guy he’d take care of the problem. Dick interviewed the gentleman, if you could call him that. The guy remembered two people in particular. One description matched the bartender to a tee.

They were here to find out if Boy was the one with sticky fingers. Remembering the purpose of their visit, Purp decided a little spanking wouldn’t hurt anything, and might get the information they needed. Boy’s hard ass glowed in front of her. “Mount up, cowboy, and ride that pony.” She sent a firm swat to his tight ass.

“Hey!” Her handprint was plastered across his rump. Boy lathered Dick’s cock with lube and smeared some on Dick’s hands. “You have to get me ready to take all this cock.”

“Sweetie, this is just the beginning.” Purp delivered another rap to his butt. This time Boy didn’t protest. She wondered what it would feel like to have her ass full of cock. She’d never done that. Her anus clenched at the idea of it.

He backed up to his mount, and in no time at all Dick primed him with two fingers. Boy bucked and bounced, ready to be penetrated. Boy eased down on the erection beneath him. Purp let the bartender get comfortable in the saddle before she continued her punishment. Since she couldn’t reach his rear end, she tweaked his nipples hard.

“Damn, Purp, that feels good.” Okay, so it wasn’t punishment now. Boy rose up and down on Dick’s lap.

The chair beat a steady rhythm against the floorboards, so it took Purp a second to register the open door. A god stood in the doorway. Another blond. Her jaw dropped. True eye candy. Shit, could this be her day? Didn’t I lock that door?

She looked over at her jacket, which covered her pistol. Something made the hair stand up on the back of her neck. Purp flexed her shoulders to throw off the odd sensation. Forgetting it, she turned back to Blondie. Eyes the color of the deep blue sea pierced her. A five o’clock shadow covered a strong jaw. A USDA prime choice man, and he looked her over from head to toe as she took him in at the same time. Oh, baby. A white dress shirt was opened enough to show a shadow of hair on his lean, muscled chest. A real honest-to-goodness blond.

The room went out of focus and everything shifted in slow motion. Purp grew dizzy peering into the blond god’s eyes, and wavered on her feet. He reached out to steady her. What the hell was that? The witchy stuff floated through her mind again. No way. But something about the man felt wrong.

He flashed a bright smile before his deep voice brushed over her. “Are you okay, pretty?”

Purp’s gaze continued down a ripped body that topped her by at least five inches. She licked her swollen lips as she thought about his thick thighs straining under her. And the front of his pants had a tough time holding a sizable package. His gaze left her and settled on Boy riding Dick. Damn. Sometimes life wasn’t fair, Purp thought, as she watched him watch the men.

Shaking it off, she pulled her attention back to the couple in the hot seat when she heard Dick grunt between clenched teeth, “I’m coming.” Shit, that was mine. Now she really wanted to smack Boy’s ass. Gathering herself, Purp looked back at the piece of eye candy near the door. “Can I help you?” she asked the stranger.

Growl and roar-it's okay to let the beast out.-J. Hali Steele
Posted by J Hali Steele at 9:15 AM No comments: