WHEN HE PLAYS
A Brief Knights story - Book 2 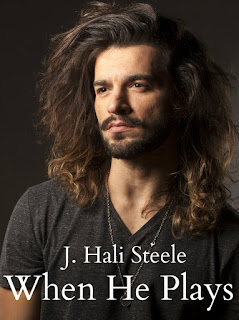 “I painted with love until she died. I never expected to meet him.”

Weston Tucker overhears a young man lament finding adequate living space or having to return to his father’s home. Perfectly manicured fingers pulled out a credit card few can name on sight alone. Young, far too handsome, Wes thinks to knock the spoiled brat, whose family name he recognizes, down a peg or two. With paint stained fingers, he proffers his card offering a room in return for having the inside of his home painted.

Hunter Gold’s job as an escort for Brief Knights has to end or his father threatens to cut him off. At the same time, his roommate leaves Hunt in a fix for housing. A few more escort assignments are booked but he takes on a job painting for a recluse to have a place to live and a small salary until he can straighten things out. Hunt never dreamed of becoming enamored of the enigmatic loner he worked for.

A young escort, a painter with a secret, and sex in the pantry. Paint gets everywhere!


A standalone MM/May-December Romance, with an HEA, and no cliffhanger. Includes lingerie fetish, angry sex, and explicit sexual language with cursing!

His father and Ruth. Before his mom died.

Words spoken now would be all wrong and he’d be unable to take them back. Hunt jumped up and flew from the room. He didn’t want to hear this. Couldn’t bare it especially after imagining the worse of Weston when all along it had been his father and Ruth, the woman he thought treated him kindly. Now he understood her motive. His father’s bellows of stop did nothing to deter him. Thank goodness keys were still in his pocket or he’d have to return to his room and face them. Heinous words would be shouted and Hunt felt relief at not having to face that prospect.
Damn! His dad and Ruth.
Hunt rode around for hours before he ended at Banyon’s.
“Man, I’m sorry, I couldn’t go back there.”
“I get that. Are you hungry? You should eat, Hunt. I made my famous lasagna.”
“I can’t eat anything, Ban.” He followed into the dining room where Stanton sat in front of an empty plate.
“Hunt’s going to join us.”
“I see.”
“What do you see, babe?”
“A situation perhaps neither of us…”
“Ooh, I dare you to say it after closeting yourself in your office with the…the guilty party Sunday afternoon.”
Stanton wiped his mouth, picked up his wine and said, “I’ll stay out of it while you two pick his bones.”
“Turns out he’s not guilty of what I surmised but he is mean, aggressive, Christ, he’s unreasonable.”
“Crotchety and disdainful.”
“If you’re going to be flippant, forget it.”
“Banyon hid a smile and nodded at Stanton who rose and quietly exited. “Aggressive you love, unreasonable is a perception. Are you positive regarding mean? When he began my portrait earlier today, I found him rather charming.”
“What?” Hunt glared at Ban. “He hasn’t painted portraits for, hell, six or seven years.” Memory of pictures he did see flashed through his mind. “His nature pieces are out of this world magnificent.”
“That good, huh? Can’t believe you two never crossed paths.”
“My mom went to his studio and, shit, I never paid attention to what she did in that room. A high school student, a new boyfriend, I avoided parents at every turn.”
“All this information is from where?”
“I googled him.” Cheeks flamed. “I looked through a couple stacks of paintings the day I found the one of my mother.”
“Ahh, you checked him out on line and ransacked his personal space?”
“Sounds terrible put into words but, yeah.”
Ban refilled their glasses. “Did you talk to him about anything before you let him bang your ass, Hunter?”
“Banyon!”
“My turn to say, with shock and awe, what! I know you. Another thing I know. Weston Tucker is perfect for you.” Ban sipped merlot. “You love slender, older, hairy creatures who are domineering and possessive with an obvious feminine bent.” Banyon snickered behind his hand. “Does he have fancy panties?”
“Fuck you, Ban.”
“Nope, nope. Remember saying ‘if you exhibited more pushiness’ you’d want me. Recall those words?” He bent closer. “I’m not the least aggressive and Stanton loves me as I am. You, on the other hand, may never find another person so fucking spot-on for you.”
“Oh my God, your mouth!”
“Nasty, huh?” Ban sighed. “All those sparks between you two amounts to something. He became reclusive for a reason. Find out why, Hunt. Dig him out of that mausoleum for goodness sakes.”
“A partial nude of my mom, his hiding it, I accused him of sleeping with her.”
“Sweet peter!”
“He caught Herm with Ruth having a private moment and he never told my mother who it turns out he knew in Philly where they both attended some art school and became friends. Said she was like a sister to him. Jeez, Ban, I’m an ass.”
“Weston told you this?”
“No. Ruth did.
Ban clasped his hands. “You have to tell him, Hunt.”
“He doesn’t want anything to do with me. Can’t say I blame him. Yeah, we had sex. It was hot and wonderful and fucking angry both times.”
“Lord, you need to at least clear air so you can put it behind you. You know how I feel about sloshing through years weighed down by baggage you don’t need. I’ve been there.”
“I, uhh, I haven’t told him about Brief Knights.” Hunt rose and paced. “He pumped Scott but didn’t get any info.”
“Fudge nuts, that’s not so bad. Look at me and Stanton.”
“Moot point as Stanton hired your ass.” Hunt stopped and, hands in pocket, he stared out a window. “How can I hold anything against him, accuse him even, when I don’t have courage to tell him I’m an escort. Someone who spends time with men for money.”
“You make it sound dirty and we both know that is not the case.”
“It’s how he’ll see it.”
“Aren’t you being unfair?”
“I told him Scott’s not goth.”
Ban pursed his lips. “An accusation, an omission, and a lie. I know someone who could use your expertise in building a wall.” Ban snickered.
“None of this is funny.”
“I’m sorry making light of it. Do you want to fix it?”
“How? I didn’t realize at the time how much I… Goddamn it. The way he is, how he dresses in pretty little see through outfits, he turns me on like a motherfucker. Is there more? Hell, I don’t know, Ban.”


Death is overrated as punishment. – J. Hali Steele (from The Disciple’s Descendants)