Are you the lucky reader who will win a Nook?
The fun begins at 9AM TODAY!

Two day chats this weekend will end LASRs monthlong, three-year anniversary celebration! With two dozen authors, and lots of prizes for chat participants (including LASR/WC tote bags, Amazon GCs, books and more!), it's sure to be tons of fun. Tell everyone you know to come by and party with LASR!
I'll be at the WHIPPED CREAM site
Sunday night from 7-8, just before the big drawing!
Chat with me for a chance to win a PDF copy of:
Ace of Spades, Stone Cold, Serviced
I'll give a book away 7:15, 7:30 & 7:45
Drawing for the Nook is 8-9PM Sunday evening!
The events take place at their LASR group: http://groups.yahoo.com/group/LongAndShortRomanceReviews/  the Whipped Cream group http://groups.yahoo.com/group/whippedcream2/  and the Aurora (YA) group http://groups.yahoo.com/group/aurorareviews/
To participate in the chats you must be a member of the respective group. Hurry, join now!

Growl and roar-it's okay to let the beast out.-© J. Hali Steele
Posted by J Hali Steele at 8:23 AM No comments: 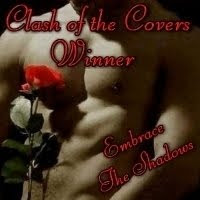 Stone Dead!
Thanks to all who voted for my beautiful cover--The Thorn is mine!!

I know, I'm partial, but I really believe April Martinez at Liquid Silver Books did one heck of a job in creating both covers in this series, and I can't wait to turn in the 3rd installment just to see what she comes up with.

Each cover represented the story so well, and for me, that is very important.

Again, thanks to Suzanne Rock for liking my cover, and to every one who visited Embrace The Shadows and voted.

Check out this week's covers--you won't be disappointed.

Growl and roar-it's okay to let the beast out.-© J. Hali Steele
Posted by J Hali Steele at 3:34 PM No comments:

There's always something beautiful to see--but you have to open your eyes!

Following that philosophy, visit Embrace the Shadow's Clash of the Covers:  http://embracetheshadows.wordpress.com/2010/08/16/clash-of-the-covers-08-16-10/  where you'll see, and have the opportunity to vote for some really hot covers. Stone Dead is in the clash, and here's what Suzanne says: "I love this cover because it is so different and eye-catching. After reading the blurb, it seems like a good depiction of the story, too".

Thanks, Suzanne, for seeing the beauty in my cover.

Don't forget Hope in Love is still up for votes in the July contest at D. Renee Bagby Presents First Chapters. You'll find some good excerpts to entice you and see more beautiful covers, plus I'm giving away a copy of Hope in Love! Visit: http://dreneebagbypresentsfirstchapters.blogspot.com/2010/08/best-of-july-contest.html

FINALLY, I'll be making an announcement tomorrow on my Friday blog at Paranormal Romantics -- it involves two hot men, and water...lots of water!! Stop by http://www.paranormalromantics.blogspot.com/ and see whats up.

Until then: Growl and roar-it's okay to let the beast out.-© J. Hali Steele
Posted by J Hali Steele at 2:07 PM No comments:

The Long and the Short of It is celebrating its third anniversary in style -- by giving away THREE Nook 3G eBook Readers that come with $50 BN.com gift certificates AND are already pre-loaded with dozens of romance and juvenile fiction eBooks.


They're having a scavenger hunt that runs from August 2 - August 29. For directions on how to earn entries to win the Nooks visit LASR at http://www.longandshortreviews.com/promo.htm for all the instructions.

Growl and roar-it's okay to let the beast out.-© J. Hali Steele
Posted by J Hali Steele at 7:04 AM No comments:

Have you been Serviced!


Ren Alsatian is no one's guide dog, but when forced to care for a blind woman, the last thing Ren expects is the straight-laced librarian who reads him like a book. She fills his dreams nightly with page after page of raw sex between the dusty aisles. He wants to show her how to smell, touch and taste again.


Marguerite Pinkston knows it isn't going to be easy living with the service animal assigned to her. She dislikes dogs and this one comes with a handler whose husky voice and wild, sexy scent enflame her with visions of entwined bodies. If only she could see...

Growl and roar-it's okay to let the beast out.-© J. Hali Steele
Posted by J Hali Steele at 9:40 AM No comments:

Can they survive Etah’s consuming need for sex and revenge—or will it tear their lives apart?
Blurb:

Etah Dane is finally free and she is hell-bent on vengeance.

Cursed by a witch, she spent twenty-five intolerable years locked in her rock hard shell—aware of everything. Etah is Stonegar, a statue created using pieces from mythical Stonehenge. Like all of her kind, she’s proud of her constant state of arousal and her insatiable sexual appetite. One man who mysteriously watched, and sometimes caressed her stony form, set her blood on fire. Etah’s body aches to know him intimately.

Slander Weldon is a sculptor who experiences a frightening and life changing event. He’d unwittingly created a monster. Even his male lover, Grant Rawlins, didn’t believe him. Then he met Etah Dane. Not only does she know the truth, she stirs a latent and uncontrollable desire in him. Slander wants to have Etah—and he wants Grant to watch.

EXCERPT:
Facing the spot she had emerged from, she formed an O with her lips, and sucked the dust into her living body. Etah watched the sparkling stream of material, making sure she had every last bit. Like a fairy’s dust, she needed it all to remain whole in the form of a person, needed it to return to her statue.

“Uh, miss,” Teetering from side to side, eyes barely focused, the bum stared drunkenly up and down her body. “You’re naked.”

She strode down the street dragging him in her wake. At the store, Etah yanked the door open and stepped in. A lady waiting to be cashed out dropped a loaf of bread and ran past crossing herself. “Whore,” she yelled before disappearing out the door.

Over two hundred pounds of store clerk leered at her from behind the counter licking his lips. “Well now, honey, how can I help you?”

“Give me your shirt.”

“I’m speaking English, I said give me your shirt.” Reaching over, she took hold of a handful of his top and hauled his ass across the counter, dropping him to the floor.

He glared at her, dumbfounded, from his knees. “Lady, you’re crazy.”

He unbuttoned it, shrugged it off his meaty shoulders and handed it over. Etah pulled the soft, warm material on and began to button it up. From his position on the floor, the clerk grabbed her around the knees and tried to take her down.

“You don’t want to do that.” Since he no longer had a top on, she grasped his thick forearms, and pulling him up, she settled his ass on the counter.

“What kind of freak are you? You on drugs or something?”

But she was. To humans her kind would always be freaks. Abominations.

Etah was Stonegar, an ancient race of statues with the ability to come alive and take a human form. They were created unknowingly by sculptors who’d over the years ransacked and stole bits and pieces of stone from the site at Stonehenge and incorporated them in the completion process of their stone and statue creations.

Stonehenge was rumored to have mythical powers.

There were millions of Gar, even cats and dogs, with hair the color of their creators. Hers was a Dane, big and blond.

One thing all Stonegar had in common was gray eyes.

Often when working with the coarse rasps or rifflers in the end stages of refining the hair or other detailed parts, sculptors cut themselves or an old wound would open allowing blood to seep into their material and from this the statues gained life.

Extraordinarily strong, Gar could best ten or more humans in a fight. They could assume their stony form instantly, preventing any damage to their living bodies. The only way to destroy one was to literally smash it to smithereens and scatter the dust to the four corners of the world.

Her kind had remained hidden for thousands of years because they were peace loving and stayed to themselves. A smile curled her lips at the thought of how many humans reported their precious stone works of art missing each year.

Often made in groups for sculpture gardens, they were also sold or stolen, in groups, so Gar were usually surrounded by family. Etah had two brothers and she knew exactly where one would be.

Once she got her bearings, she was heading for the bitch who cursed them. The first thought in her mind--make sure her family was safe. The second--kill the witch who ensconced them in stone for twenty-five fucking years. And any relatives she had. Make them suffer as Etah had, bound in her statue.

“See the guy over there,” she asked the frowning man she held immobile on the counter. She pointed to the drunk who tried to hide by wedging his slight frame between two soda dispensers. “Whenever he comes in here to piss, you let him. And feed him every day.” Grabbing the beefy clerk’s balls, she gave a hard twist. “That way I don’t have to come back.”

“Good.” She ignored the sound of the door swishing open behind her. “I’d really hate to hurt the family jewels.”

“Easy, miss, I think you’ve made your point.”

Etah swept around ready to attack. She met amber pools of light that held a hint of humor. His cheekbones were high in a hauntingly handsome face, and he had the complexion of well used porcelain, soft and creamy. A blue black ponytail hung over one shoulder to his chest and was tied off with a red ribbon!

Goody, a present just for me.

The Long and the Short of It’s celebrating their third anniversary in style -- by giving away THREE Nook 3G eBook Readers that come with $50 BN.com gift certificates AND are already pre-loaded with dozens of romance and juvenile fiction eBooks.


You don't want to miss it!

You can't beat that! So, hurry over to http://www.longandshortreviews.com/promo.htm  read the rules and get yourself entered in one of the best contests for the year.

I'm a participant, sooo, I'll see you there!
Growl and roar-it's okay to let the beast out.-© J. Hali Steele
Posted by J Hali Steele at 5:29 PM No comments: