The Triumvirate now on KindleUnlimited

All three books are now available at Amazon on KindleUnlimited:


White Blood
When bitten, blood runs in one color.

In a society full of deadly vampires, discrimination of any sort should have no place. Yet intolerance continues to haunt Cayson Covett who returns to his hometown a changed man. He is a powerful creature who yearns to rekindle his romance with the black man he can’t forget.

Curtain, a small racially divided suburb of Charleston, is where Jackson Reynolds almost took Cayson’s virginity. Now Cay intends to give Jack what he wanted. First, he must see to the vampire Triumvirate’s request to punish not only vampires who seek to destroy humans, but he must disband or eradicate Curtain’s hunter cell—a bigoted group headed by Jackson.

Layne Indigo’s existence abounds with extremes—men, women, his own bloodlust, and death. Especially death. He’s a supreme stalker of not only humans but his kind, vampires, some of which are so audacious he relishes ending their lives. Adding to his troubles, he becomes enamored with a cunning woman who hates vamps more than anything and Layne can’t let Emerald “Esme” Franklin out of sight.

Carnage amongst both species has Layne uncertain of his ability to continue as a member of The Triumvirate that rules over vampires. One thing he is sure of after Emerald surrenders her virginity—Layne wants more. Until Esme belongs to him, Layne won’t stop.

Twice the Burn
Blood ties change with just one bite!

Julius Talmane turns Isaiah Sims because he desires having him forever. The Triumvirate has little choice but to give its blessing considering Julius is not only its third member, he’s Layne Indigo’s best friend. What he didn’t see coming is falling for one woman he should never ever dream of touching.

One creature seizes Piara Kaur Indigo’s attention; another is thrown in her lap. Not only does she crave both, together, she intends to keep them. Their inability to hide shared carnal desires from Piara’s son, Layne, the strongest, most magical vampire alive, may well spin civilization toward destruction. Nature is on a rampage and no one is safe!
**Multicultural/Interracial MMF Romance**

Growl and roar - it's okay to let the beast out.- J. Hali Steele
Posted by J Hali Steele at 4:27 PM No comments: 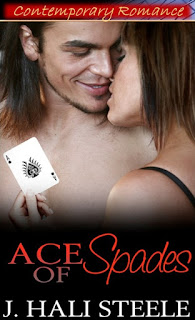 Aldan ’Ace’ Spade is a gambler who knows how to handle success and luck—until he meets Rosemary Carino, the new hostess of a club he frequents. He has reasons for keeping his business dealings private but his life quickly spins out of control. Roe’s sexy and curvaceous body stirs a fire in Ace he can’t extinguish while consumed with need to have her in every way possible.

Roe gave up working the pole in topless clubs long ago. Thrust back into the business, she fights to stay out of the clutches of hotter-than-hell Aldan Spade. It’s not going to be easy. Her body melts around him, aches to know his intimately and hiding her past from Ace turns out to be much harder than stripping off her clothes ever was.

His lie and her secret past may just bring the lights down!

Warning: Hot sex, fast cars, and a yacht dead ahead.

Available at Amazon on KindleUnlimited

Almost a month had passed since their first date. After work tonight, Ace was taking her to his place for another gathering of friends. This would be Roe’s first time there since the hot and heavy in his hallway upstairs. Once again, he promised to take her right home afterward.


He picked her up and, when they arrived, Roe was happy to see Kat there with Chess. Her friend hadn’t yet made Chess aware of precisely how much she liked him and she teased her about it, especially since Kat kept pushing her toward Ace.


This time she got the grand tour, inside anyway, and she told him she used to sell real estate and that she had always wondered about people who bought these houses. Roe had never been lucky enough to get a listing in this area.


Practically all the guys and their dates were gone when Roe made her way to the bathroom upstairs. When she came out, she knew he’d be there. Déjà vu. Ace stood in the spot as before.


She walked up to him, reached behind his neck and tugged until his lips met hers. The kiss started soft, sweet but soon it wasn’t enough. Engulfed in his scent, the delicious taste of his mouth, Roe also craved more.


Pulling away, he quietly stated, “Roe, don’t play with me. I’ve shown in every way how much I care about you. I enjoy being with you and I think you feel the same.”


He did. Ace wrapped arms around her and pulled her so close a toothpick wouldn’t have fit between them. His hands caressed her neck, her arms. Every place he touched, he followed with his mouth. Roe shivered with need.


A string of hot kisses streamed down her neck, he nibbled on an earlobe before he used teeth to unravel one tie helping the zipper to hold up of her halter dress. His lips moved down her chest and back up again. Raising his head, he gazed at her. “You’re sexy as hell.” His tongue left a hot, moist path everywhere. Finally, he stopped and thank God because Roe’s knees couldn’t hold out much longer. A greedy look pierced her, yearning lit his eyes and she damn near swooned. “Stay with me. I’m not making any more promises. Let me hold you, taste all of you. Tonight.”


She uttered one word, “Yes.” It was all over.
♠ ♠ ♠ ♠
“God,” he groaned as his lips crushed against hers. He swooped her up, carried her into his bedroom and stood there, holding her.


“Shit, please don’t change your mind, baby.” Ace breathed heavily against her neck. “Nothing matters but now.” Sitting her on the bed, he touched the base of a lamp on the nightstand and a soft glow filtered from beneath the shade.


“You have company downstairs.”


“They’re into their pool game on the other side of the house.” He pushed a button on his Bose player and smooth sounds of jazz drifted through the room. “I want you and my friends know their way out.”


“About them knowing their way out?”


Growl and roar-it's okay to let the beast out. - J. Hali Steele

Posted by J Hali Steele at 7:10 AM No comments: