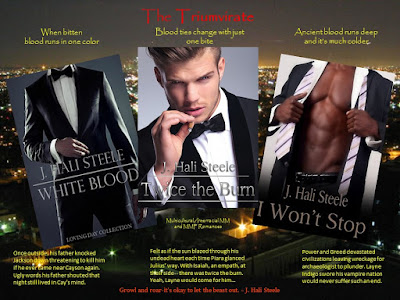 Layne Indigo threw a racist prick out the window of a high rise office building in White Blood. See what he's up to in the second Triumvirate story, I Won’t Stop.


Layne Indigo’s existence abounds with extremes—men, women, his own bloodlust, and death. Especially death. He’s a supreme stalker of not only humans but his kind, vampires, some of which are so audacious he relishes ending their lives. Adding to his troubles, he becomes enamored with a cunning woman who hates vamps more than anything and Layne can’t let Emerald “Esme” Franklin out of sight.


Carnage amongst both species has Layne uncertain of his ability to continue as a member of The Triumvirate that rules over vampires. One thing he is sure of after Emerald surrenders her virginity—Layne wants more. Until Esme belongs to him, Layne won’t stop.

“You like her.”
Layne had allowed his shields to slip. “So.” He had good fortune to be familiar with Brakius Demeter. Deliciously familiar. Watching him tempt Emerald angered Layne. After departing Shadows leaving Esme in Cayson’s care, he became aware she had eavesdropped on two hunters before Jackson frightened them away. It only perpetuated his angst. Goddamn it! “Do you remember what happens when you endeavor to fuck around in my head?”
“You’re bewildered, or should I say bewitched?”
“Kiss my ass.” Brakius saw too much. “What lured you from Greece?”
“Thought I’d check on you and your pet, Julius.”
“Disparage him once more and I’ll make you sorry before I kick your ass out.”
“My liege.” Jackass bowed low. “You remain supreme.”
“Call me your liege again and something other than my dick may find its way in your ass.” Mystic blue eyes tugged at memories Layne thought buried.
“Am I not entitled to a little jealousy?”
“Jealousy has no place in our lives.”
“I miss you.”
“You miss my cock.”
“Same difference.” Brake stroked Layne’s cheek. “Your jewel is delightful.”
“You discovered her name is Emerald.” He’d never shared blood with Brake, but had taken his often. “She’s off limits.”
“Why?”
A question befuddling him more and more. It began to piss Layne off. Strengthening safeguards and wishing to mask true feelings, he fondled Brake’s dick. “I locked her mental path so others couldn’t surf her psyche.” He twisted the vamp’s nuts hard. “Don’t touch the mind of anyone who even knows her.”
Brake showed no pain. “You always preferred women.”
“You never enjoyed their softness.”
“They fill a void when nothing else is available.” He pushed Layne’s hand away. “Virgins, male or female, are too much work.”
Laughter ricocheted from walls in the penthouse suite Layne had accommodated for himself and Esme. “Liar. You love to be sheathed in a tight, new asshole.”
“Will you suck my cock?”
“You can suck mine.” If only to shove Emerald from his thoughts for an hour.
“Will I get to take the great stalker?”
“No.” Layne reached behind Brake’s neck and pulled him forward so fast and hard he ripped into Brake’s lip. God, everything he wanted to do to Emerald burst into his mind. Honey-hued skin, shapely legs, and a behind begging for penetration. His dick pressed hard against his zipper seeking release but he refused to remove his slacks. Tongues lashed, slipped deep, and savored everything he and Brake experienced in absence of each other.
“You like dancing with her, holding her close.” Brake drew away. “You freely share past remembrances as well as what you want from her.”
“Don’t pretend you don’t like it.”
“We never danced.”
“And you don’t want to now.” Layne tugged his hair. “It’s not who we are.”
“Perhaps I don’t like you tripping through my mind.”
“Stop. Petty bullshit and jealousy doesn’t become you.” Layne pivoted and walked behind his well-stocked bar. “Absinthe?”
“Unless you have something higher in alcohol content. My body craves the false warmth it provides.”
He kept a case at his home and whenever he traveled, he made sure there was one on hand. Why? It had been nearly two years since he last saw Brakius yet it felt as if only a week separated them. Living perpetually, vampires became bored and sought gratification in ways they otherwise would not have discovered if they lived one lifetime. He found pleasure in Brake who resented Juls. Liaisons with other men never bothered Brake because Layne never befriended any aside from Juls. Passing a tumbler to Brake, he stated, “I had Julius once.” He poured himself a shot of bourbon and moved to stand beside his lover. “If I have to remind you again, or if you ever touch him, you will not be welcome within a hundred miles of me.”
“A hundred miles?”
“You know no other man will ever hold the place you did in my life.”
“Did?” Brake’s eyes became midnight blue. “It no longer matters.”
“There must be better use for your delicious mouth.” Virgins, male or female, are too much work. Brake’s words bounced back into Layne’s scattered mind. “I will use you.”
“Why a hundred miles?”
I still need him. “Because any closer I’d smell you and hunger after salvation only you can give me.” Brake’s soft hands, his whispers of deliverance had once drawn Layne from Hell’s precipice. He owed him his life. Grasping behind the vampire’s neck again, he brought him close enough to lick his lips before he snapped, “Tell me how you know she’s a virgin?” Not only did he need Brake, he no longer felt annoyed thinking of him with Emerald.
Unraveling, out of control—all because of her.
Christ, Layne hadn’t even touched her yet!
“You’d have to put her in a bubble to hide her aroma of innocence.”
Layne hadn’t reckoned with Emerald’s scent. Nothing he could do about it unless he kept constant vigilance over every vampire within sniffing range. Thank God, they all feared Layne. Hoisting Brake up, he commanded, “Wrap your legs around me.” He carried him upstairs.
“She can’t be erased from your mind.”
“I intend to try.”
“If it doesn’t work?” Brake searched Layne’s eyes.
Fear of once again looking into that black hole of death and destruction gripped him. Unable to banish Emerald from his mind, wanting, needing Brake more than he cared to admit. Layne growled, “I’m going to fuck you until you can’t walk.”

Growl and roar-it’s okay to let the beast out. - jhalisteele