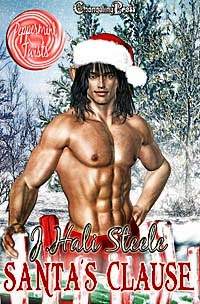 Breaking bad with Santa is so damn good!

Lacey Dalton gave up on Santa Claus a long time ago. Every Christmas Eve she waited like a good girl to see what Santa would bring. He never came. Now she’s in her late twenties and he shows up with a contract! If Lacey signs on the dotted line, anything she wants is hers… if she lets Santa have her for one night!
Read More

Changeling's Naughty Nights of Christmas -- with a Peppermint Twist:

The best part -- all you have to do is buy any Peppermint Twist Christmas title at ChangelingPress.com between Black Friday and December 31st, 2014, and you're automatically entered to win.

Winners for the Free Books for a Year Contest will be announced December 31st at the Changeling New Year's Eve Party, held on our Changeling Press Readers' Loop.

The Not So Fine Print:
* Naughty Nights of Christmas Winners are eligible to win more than one prize.
* Winners will be chosen randomly from purchasers of books in the Changeling Press Peppermint Twist Christmas Series.
* Each Peppermint Twist Christmas e-book purchase made in 2014 before the final prizes are announced counts as an entry.
* Winners may choose any Changeling titles currently in production on the ChangelingPress.com website at the time the prize is awarded.
* Prizes are available as Changeling Press E-books, to be downloaded from ChangelingPress.com only.
* Free e-book download links do not accumulate, and will expire if not used within 30 days from the date on which they were awarded.


Growl and roar-it’s okay to let the beast out.
Posted by J Hali Steele at 10:33 PM No comments:

Getting the handsome blue-eyed devil out of her mind won't be easy. Maybe one more time, one night...

Excerpt:
“You think you have a chance with her?”
“Yeah, I do.”
“And if he comes back?”
“She says she’s over him.” Damn, when he’d asked if she was sure, Marcia had changed the subject.
“And don’t be like Sly, making a promise to stay out of her mind.”
“I won’t need to read her mind. I can win her without that bullshit.”
“Right, right.” Wick’s laughter dripped with sarcasm.
“I’m not going to delve into her psyche and root around like you would.”
“What the fuck is it with you two?” He shook his head. “Women are most adept at telling lies.”
“Whoa, man, don’t bundle all women in a group like that. Wave would never lie.” Sly glared at their eldest brother.
Wick pulled another frosty beer out of thin air, and sat back down in the same, magically dry, spot. “Your woman is different, she has,” he glanced skyward, “ties above, she can’t lie.”
“She wouldn’t lie if she didn’t have a heavenly connection.”
Slick needed to stop this before it got out of hand. After the last altercation between his two older brothers, he’d spent more time than he cared fixing his place. “Could you two take this somewhere else?”
Wicked spun on him. “Fuck off.”
“Fuck off? This is my place. Skedaddle your ass to the fourteenth floor where you can do as you please.”
“Skedaddle. What the hell kind of word is that?” Sly laughed.
Wick wasn’t done. “You really think Waverly wouldn’t lie to you if she could get away with it?”
“Hell’s sake, Wick, let it go.” Slick was thrown against the wall, and held pinned there. “What the…”
“Answer me, Sly.”
“Bro, I don’t know what your problem is, but it’s not with Slick, let him go.”
“You gonna make me?”
Heat in the apartment blossomed a hundred degrees, and they groaned in unison knowing what was coming. Slick fell to the floor as it split open. The flames licked through the space followed by Lucifer’s forked tail. Flapping around, it destroyed every piece of furniture in the room before it wrapped around the triplets and yanked them through the flaming abyss, and below.
Slick brushed at the embers on his pants. “I didn’t start this shit. Wick was in my apartment playing games.”
“What is happening to each of you?” Satan spat.
“Each of you?” Wick flopped into a chair and eyed Sly. “I’m not the one pussy-whipped.” Turning toward Slick, he added, “Or the one trying to wrangle a piece of ass.”
“Wicked, what did crawl up your ass and die?”
Slick thought, for a change, he might come out of this unscathed.
“What the fuck do you mean?”
Holy shit! Slick watched as his brother’s lips snapped shut forming a solid line, and his cheeks puffed out. His older brother’s eyes turned red with fury, and horns sprouted only to melt into his hair.
“Don’t you dare come into my house and act like you own it. I’m not your brother, and I will whip your ass from here to kingdom come and back.” He and Sly watched silently as Satan’s horns pulled back in his head, followed by the talons disappearing, and the tail flipping out of sight. “He twisted and dropped onto his throne. “Christ, I’m tired.”
A bolt of lightning blasted through the wall and wedged there. All eyes watched it wage war with the stone holding it. The shaft shook left, right, and then slid forward another foot.
Josette appeared from a white mist and stood, her back to the jagged bolt. “Lucifer, say you’re sorry.”
“The hell I will.”
“Lucifer…”
“For crying out loud, I’m sorry, okay.”
The bolt slid back through the wall and shook the earth as it left Hell and traveled heavenward.

"I want to read more from this author. Can't wait to see what else is in store for me in her stories. I think everyone has some wicked in them, I know I do! I am so glad I read this book because I had one hellacious time reading this book! My question for you is can you handle the heat?"

J. Hali Steele
Growl and roar-it’s okay to let the beast out.


www.jhalisteele.com
Posted by J Hali Steele at 8:38 AM No comments: