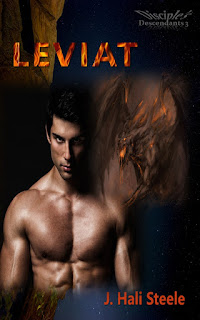 Matthew Leviat has chased the screeching creature for centuries, captured and made love to her many times. Angry, forbidden love. The kind of love he still dreams of, a love that keeps him from seeking another of his own kind or even human women he sometimes finds solace with.


Sinalia vows never to see him in another female’s arms. Not their kind and definitely not one like the human she found him with nearly a hundred years ago. Anger still claws her insides when she thinks of it, remembers his whispered words of love to the woman over and over in her mind.


Yet their love, their need for one another never, ever subsides.

“Curse the Divinity.” Stones skittered from overhead drawing his attention. Spewing fire toward the spot unearthed Sin’s hiding place. A myriad of colors encircled her dragon clinging with its sharp talons to a shear drop off located feet above a slender ledge. Cloaking his mind, not wanting to alert her, Leviat dove further into the crevice below. He weaved through a gully before swooping up and cresting the mountain. Crossing over rocky spires, he snapped his wings close to his body and, as if a rocket, he shot down landing just beneath Sin. Her angry wail echoed through the Montana valley when his claws grasped her muscular legs and pulled her flailing beast from the cliff’s side. Claws dug into his shoulders and Leviat’s much louder squawk ripped through the atmosphere. Any living thing with good sense scurried for cover.
She scorched his mind with one word. Bastard!
Lover.
I hate you.
Leviat knew she didn’t mean that. I want you.
I wish you were dead.
After their last encounter, Sin could mean that. He’d let her leave believing he screwed the human woman she discovered him with. Loving you as I do, I shall give you what you wish for.
Pulling huge wings into his body, his reptilian face changed instantly into a human-like visage. Enough. Enough hiding, the bullshit—the loneliness. Sinalia was his and if he couldn’t have her forever, death was a much better alternative. Time in the form of days, nights, years, failed to assuage his pain any longer. Nothing stopped him from thinking about the glorious being that should be his. To hell with the Divinity. To hell with Gage Harrow. Let the bastard search for another protector for John Thunder, the being he’d spent hundreds of years guarding could now fend for himself in this cruel world. Leviat was finished. Flinging himself from the ledge in his human form, dropping over a thousand feet and slamming into stony outcrops would break every bone in his body.
Nooo!
Leviat botched hiding his thoughts and the wail in his mind of her pain at losing him blasted a hole through his heart. Don’t listen, shut her out, shut out her sound of despair. Jesusfuckingchrist, Sin, what do you want from me? Probably wouldn’t die anyway just end up maimed and crippled for weeks praying Gage turned up and cut his black heart out to drain his life’s blood into the nearest body of water.
I love you.
Aww, fuck.
Quickly regaining his dragon form, letting his face elongate, loosing wide, red-striated black wings, Leviat used all his strength to return upward and snatch Sin to his chest. Enfolding her in his stronger wings, he flipped from the ledge and angled down into the valley. Zigzagging along the mountain base, he spied an opening and headed for the cave entrance. One night with you is worth another hundred years alone.
Don’t leave me again.
Never. Leviat meant it.
Love me.
I already do, Sinalia.

Sinalia had waited too long to be in his arms. Wrapped tightly in his wings made her crave the man who’d moments before vanished, replaced by the oldest, wisest dragon alive. Hers. Leviat belonged to her.
Her master left her on her own without any idea when he’d reappear. Surveying Gage’s every move, determining exactly when the disciple’s leader vanished into the ground, she surfaced at the lake. Didn’t care who watched. For a few moments Sin even forgot about his whispered words of love to the woman he’d held in his arms all those long years ago. An unbearable ache resided in her heart with only one remedy—having Leviat.
Once in the cave, she was quickly released and Leviat drew in his wings, called out his man-like body, and stood still before her. Gold striated icy blue eyes which took longer to metamorphose, gazed at her truest form. Dragon. Warm, human fingers blazed a path from her scaly neck down, down to her chest, and tapped where Sinalia’s heart resided. “Had you remained a moment longer you would have known my words of love were meant for you.”
It was the woman you held, not me.
“Sin, it’s you who lingers in every living, breathing part of me.”
Liar!
“Damn you, change! Let me see the woman, the voluptuous body I want to hold forever.” Fingers continued to rap the place on her chest where her dragon would rest.
Sinalia’s leathery reptilian face gave way first. She glanced down at his strong, tanned fingers over her heart. Their incessant tapping resonated through every boney part of her beast. Each tap notched temperatures higher, made her hotter than hell. Scales slowly disappeared and her colorful dragon skittered back and forth until it coiled beneath his now flat hand covering her breast. “I need you.”
“I know.”

Growl and roar-it's okay to let the beast out. - J. Hali Steele
Posted by J Hali Steele at 1:12 PM No comments:

It's here! Not a big fan though as it heralded winter, or vice versa. Too cold to go out, too cold to do a darn thing... Wait - reading, it's always a good time of year to read and I happen to have two Christmas stories! 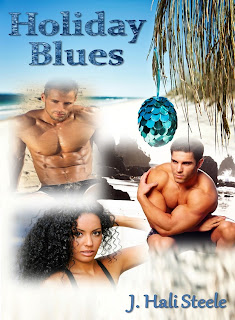 Two men who love each other, add one woman…


Pennington Seevers picked the same all-inclusive island get-away the very woman he wants to escape also chose. Partner, best friend, and lover, Rory Burton, is along for the trip and though they enjoy sex together, even love each other, Rory insists Pennington is more than attracted to Headley Etta Xavier and accuses him of not wanting to share as they often do.


Headley Etta Xavier who goes by the name Hex knows involving herself with her boss, Pennington, or his second in command, Rory, might mean an end to her job so she takes her first vacation in years hoping to wipe both from her mind. Little does she realize the men she watches having sex from a hidden spot behind a tree is Penn and Rory. Worse yet, seeing them in the act doesn’t deter Hex, it makes her hotter than hell!


A holiday to remember or a case of holiday blues?
**Interracial MMF Ménage ** 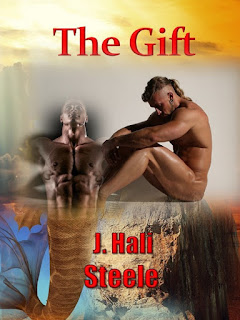 Rad and Crayton— the same yet different. They meet as often as possible throughout the year to be together. Christmastime is particularly special; it's when they celebrate their bonding. Mermen, one born in the south Caribbean Sea, the other from frozen waters surrounding Iceland. Neither can exist for long in the other's climate.


Rad returns to his summer home in Pennsylvania, determined it will be the last time. The cold has taken a deadly toll on him. Cray can go no farther south, so they will have to give up their bonding celebration, and the Christmas holiday together.

Cray discovers a way to defeat Mother Nature but—is it too late?

Growl and roar-it's okay to let the beast out. - J. Hali Steele
Posted by J Hali Steele at 11:58 AM No comments:

A Changeling For All Seasons, Volume 8 is here! 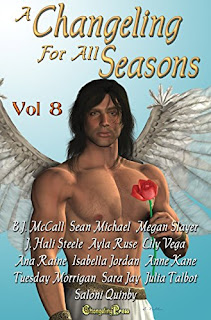 What an awesome compilation of thirteen (13) wonderful authors who have spun tales to brighten your holiday. Previously published, here's who and what you'll get in one hot set.

B.J. McCall -- Lick This: Faith hates peppermint. Can a sexy Elf tempt her to lick a candy cane laced with Christmas magic?

Megan Slayer -- Shifter’s Challenge: Time to see what magic Christmas has in store for Steve, a black cat shifter, and Landon the Elf

Ayla Ruse -- A Reckless Gift: Rec thrives on command. Lacy, chaos. When the two come together, they burn bright as the North Star…

Lily Vega -- Naughty, Naughty: Maisy wants Santa’s elf, Zed, and the special toy he crafted for naughty girls, all to herself.

Sean Michael -- Bad Elf, No Candy Cane: Sent to bring Syllabub back to the Pole, Power decides he’d rather play games with the Elf.

Ana Raine -- Xander: Can Xander and Walter the Elf find their own Christmas magic right here at home?

Anne Kane -- Puppy Love: Who can resist a stubborn werewolf with a wicked sense of humor?

Sara Jay -- Letting Go: Jack Frost is after the Snow Queen’s heart, and this winter he may just get his Christmas wish.

Isabella Jordan -- Wrapped In A Bow: Discipline is tough -- even in Santa’s Workshop.

Growl and roar-it's okay to let the beast out. - J. Hali Steele
Posted by J Hali Steele at 7:25 AM No comments: