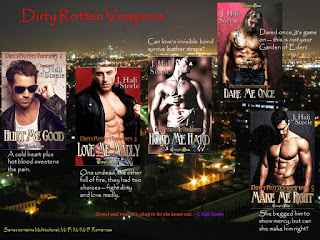 Dare Me Once - Dirty Rotten Vampires 4

Vald Gerlach is the oldest vampire alive and the power encompassed in his body can only exist in one monster at a time. Today – he’s that monster. With thousands of years to devise ways to make a creature beg, Vald will test some on Drecara whose hot, curvaceous body he desires. And because he must, he plans to experience the charms of Mictain, her protector, just to feel his burn. The game is on and Vald hopes the extraordinary demons are up for the challenge.

This is not your Garden of Eden!

Vald Gerlach never gave a second thought to why. He didn’t have to. If he wanted to do it, he did. If he desired having it, he took it. “Jesus, didn’t I answer that already?”

“Don’t you understand it’s wrong?” Adam stood before him expounding on something or another Vald had done or would do.

Vald had stopped listening to the heavenly being long before Adam voiced the second question, and now there were more. Christ, watching Adam’s toned body glisten with water as he had climbed from the enormous pond after Vald appeared in the Garden of Eden stirred rampant memories of life’s forbidden fruits, memories Vald wouldn’t mind reliving.

“Do you have no feeling of remorse?”

“Remorse for what?” Concentrate, damn it.

Adam, the first man God had placed on Earth, was haranguing Vald for possessing what Adam himself was responsible for. The unrelenting thirst for everything that felt and tasted good which existed in Vald’s cold, undead body came directly from the magnificent male in front of him. If there was an honest bone in Vlad’s body, that came from Adam as well. Fuck, considering Vald had stolen the first woman placed in the beautiful, serene garden to ease Adam’s loneliness, Vald probably owed Adam something.

He remembered his first meeting with Lilith.

Vald had slithered in the shape of a serpent through the tree filled with shiny red fruit and landed at her feet. Wrapping around long, luscious legs, he slid up her ripe body licking and sniffing every inch. When he took on the form of a man, a form damn near more perfect than Adam’s as heaven and hell had a hand in his existence, Vald eyed her with one thought in mind -- bedding her. Lilith had extended her hand as if a dainty maiden, yet her heart beat with lust and yearning. Vald had taken proffered fingers in his and pressed them to his lips before embracing her, burying fangs into Lilith’s jugular, and extracting her sweet blood. In minutes, she was beneath Vald with his penis buried deep inside her.

Adam never forgave him, nor did he forgive Vald for making her a blood-addicted whore for any wanton vampire traversing Earth, a place teeming with dark creatures competing for supremacy in a world gone berserk. Lucifer also made sure Vald never forgot his treatment of Lilith, and as retribution he had snatched something from Vald the vampire had yet to forget.

“If I remember correctly, Adam, even then Eve stirred in your body.”

“I’m speaking of the demi-vamps overrunning Earth.” Adam turned from him in an attempt to hide his true feelings. “Lilith is a thing of the past.” He jerked around to peer at Vald with icy blue eyes, chin held high. “Still, Lucifer will not forget.”

“It worked out for the better.”

“You presume to know what God intended?”

Vald had expended far too much power traveling to the Garden of Eden, a tranquil and holy place in another dimension. Haggling with Adam quickly grew tiresome. “He allows many things to plague His imperfect humans.” Adam eyed Vald warily as he began to circle the Godly creation. “You were first.” Vald reached and captured a dark, wet curl lying over Adam’s shoulder. “And still His most perfect creation.”

“I nev-never understood why He let Satan, or you for that matter, invade the Garden.” When Adam stuttered, it meant fear passed through his heart. No hellacious creature could ever again enter this place. What -- who caused his apprehension?

Vald felt a soft, tentative push in his mind. It ended so quickly, he wondered if he’d imagined it. Shaking his head, he strengthened his shields. “Adam, you continue to ask why He mysteriously allowed Lucifer to place me here.” Something Vald never questioned. Filled with an abundance of righteousness, Adam didn’t understand the necessity for darkness and evil to subsist alongside good. “Perhaps I am God’s sword of challenge, His dare to every living thing.” What would men triumph over if everything remained sweetness and light? “Taking your blood made me the first undead monster alive.”

Adam sighed. “I continue to need you even though I have Eve.”

Vald had him. He waited for Adam to step forward, give him what he required to bolster his extraordinary powers. Blood -- heavenly blood.

“Mixed so deliciously with yours.”

Vald whispered, “Come to me.” Tugging hard on the hank of hair he still held closed the distance between them.

“This must be brought to an end.”

“I will touch parts of you Eve doesn’t even know exists.”

“Why are you doing this, Vald?”