Ice water in his veins will boil over and burn. 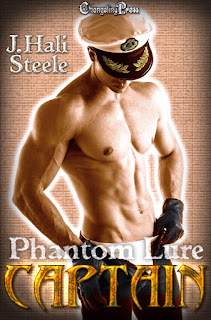 Gentar Finway, a Phantom Lure from northern Europe, prefers Nordic weather and icy waters. Heading south to the Caribbean, captain of a cruise ship on its maiden voyage, his blood turns hot and his sexual desires mount when he touches his new chief officer, Salvatore Martino.

Each time Sal glances his way, Gent envisions turning him out. Yet it’s not what Gentar unearths beneath Salvatore’s strait-laced façade that brings his blood to a boil -- it’s the strength garnered from the most powerful Phantom alive!

Excerpt:
“I know what you are.” Thomas sighed. “I’m also aware you can erase my memory, snatch away everything we’ve shared in seconds.”
“Ménages provide much more power.” Why didn’t he want that now?
“And I’ve enjoyed them with you.”
Lately, Tom’s possessiveness concerned him and he didn’t want to chance dealing with another problem on this voyage which is why he donned gloves. Yet he felt the need to touch Salvatore Martino so strongly he had removed one. “Why do I want him alone?” He recalled his encounter with Grange. Jesus, had Lucifer loosened his grip enough to allow Gentar… No. He definitely didn’t reek of the man as Grange and Conner had smelled of their human. He spun to face Thomas. “His eyes, the way he looked at me with such trust.”
A tap came at the door and Tom touched his cheek lightly. “It’s not like I’ll miss you.” Whiskey brown eyes pierced Gent. “Hell, I won’t even remember you, right?” A more insistent knock pulled his engineer to the door. He yanked it open and waved the young man in. “He’s waiting for you.” Tom brushed past Salvatore.
Bewildered by his insolent tone, he attempted to stop him. “Thomas.” He kept going. “Shit.” Caught off guard by his confusion, Gentar shook his head to clear it before walking to his bar. He grabbed a bottle of brandy and opened it. “Do you drink, Salvatore?” Up close, he was breathtaking. His skin, a sun kissed color enjoyed by those lucky enough to carry Mediterranean blood, taunted Gent whose fingers itched to touch him all over.
“A beer now and then.”
The liquid sloshed from the shot glass. “I find it calming.” Gent turned the tiny glass up and drained it. Pouring another, he passed it to Sal and this time he allowed his fingers to linger against his chief officer’s hand. “I do both dinner services which is why you see captain listed for each. Thomas is gay and will handle all meetings for the Friends of Dorothy.” Emerald’s Dawn Lady’s inaugural cruise had the honor of conveying a large contingent of gay men bound for a big celebration occurring in the town of Frisco on Cape Hatteras, North Carolina. An unusual destination to say the least but someone had paid dearly for a one-night layover. He eyed Sal nervously drink the shot of brandy before adding, “Your only job will be to see to my needs.”
“Sir?” Salvatore’s nose wrinkled.
“I magnified your senses. Tell me what you smell.”
“You. Sex. I’m not sure…”
“I’ve been in your mind.” They were both a couple inches over six feet so it was easy to lean into him and bite his earlobe. Salvatore’s slight build contradicted whipcord muscle covering his frame. “I want you to wear the earring you took out.”
“The company frowns on it as do most captains.”
“I’m not most captains.”
Sal tentatively touched his face. “I-Captain, I’m not sure what’s happening.”
“Say my name.” He wanted to hear it whispered from the man’s mouth.
“I’ve never wanted a man in my entire life.”
“So damn beautiful and so young.”
Sal snatched his hand away as if it burned. “I’m close to thirty.” Bristling at being called young lit a fire in his eyes that excited Gentar.
“Your eyes raked me thoroughly on the bridge and I think you liked what you saw.”
“You noticed that?”
He lied about not wanting a man. “Salvatore, I know your every thought.” He kissed his chief officer lightly, wanted so much more. The walls of his suite, which he had covered in copper to remind him of where he hailed from -- the fiery bowels of hell -- danced with sunlight glancing through the window. “I want to taste every inch of you.”
“What?”
“I am Phantom Lure.” Salvatore’s eyes stretched wide. “A monster straight from hell, and for the next two weeks you belong to me.”

Growl and roar-it’s okay to let the beast out. - jhalisteele