I have beautiful babies and I wanted to share them with anyone who drops in. Each is so special in their own way. 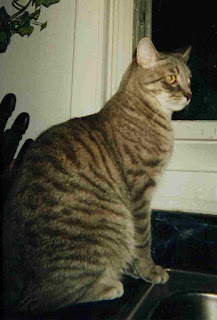 My big guy, Lord Greystoke, has eyes that rival the rarest amber! He's part Maine Coon, weighs in at 20+ pounds and is diabetic. However you can see he's not overweight. Pic is 4-5 years old and he hasn't changed a bit. Guess he was genetically predisposed to battle this disease. Grey is 16 and get's 2 shots almost everyday! The days I miss are few and far between and he's okay with that since he hates them.


If I had two children, I'd still love Kid, my first and only child, more! Probably why I only have one. 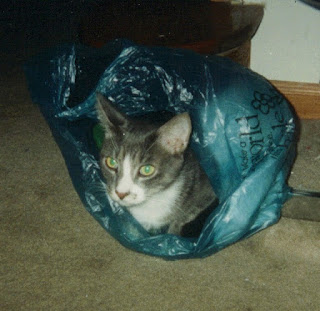 Next, in the bag, is Wolfdancer who has magnificent green eyes. A rescued stray whom I found without fur and his eyes were not even open. Vet thought he was about 5-7 days old and said he wouldn't live through the night.

September coming, he celebrates 15 years of life in this world!

Then their is Jewel named so because she turned up on my porch with a bb in one eye. Though you can't see it in this lousy pic where she's napping with her brother, Grey, that remaining eye is a bright yellow jewel. Still partially feral, she's camped out with us for 9 years and loves to sit by me, sometimes in my lap, as long as I don't make any sudden movements. She does not tolerate being picked up or handled in anyway. Boy, getting the flea medicine on her is a battle royal! Let's not talk trapping her for a visit to the vet. It's damn near impossible.

One day I'm going to take better pictures...no, probably not. I hate taking pictures - a lot! 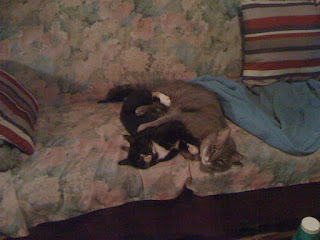 Growl and roar-it's okay to let the beast out.

Posted by J Hali Steele at 5:38 PM No comments: