Me, You, and…WHO!
Holiday Blues

Pennington Seevers couldn’t believe he had picked the same all-inclusive island holiday get-away that the very woman he wanted to escape also chose. His partner, best friend, and lover, Rory Burton, was along for the trip and seemed to find the situation to his liking. Penn and Rory enjoyed sex together, but Rory insisted Penn was attracted to the woman, and if he told her, they could possibly experience the best holiday ever for a few blissful weeks in the sun. 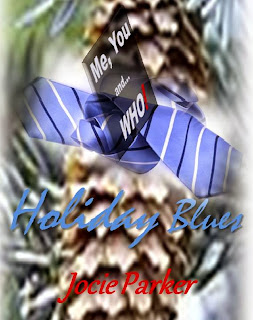 A holiday to remember or a case of holiday blues -- which way would it go?

Available now
STEP OUTSIDE THE BOX 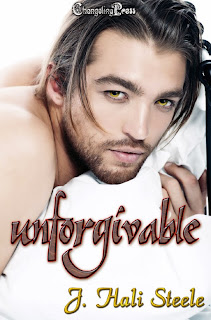 Releases today! Hope you caught my interview with Chance who you can meet in UNFORGIVABLE, his story will be told in UNREDEEMABLE, and guess what...signed contract this morning for UNHINGED!

Here's a bit about Rand and Nola from UNFORGIVABLE:


Blurb:
One careless shot in the dark, and their lives collided.


Nola Lester finally had enough of life in the city’s fast lane. She needed to get away, get back to her roots, but tending a wounded hunter whose controlling and charismatic personality triggered strange desires threatened Nola’s plans. Perhaps changing her agenda may not be such a bad idea.


Rand Mitchell anticipated relaxing in the secluded mountains he felt drawn to year after year. There would be no rescuing animals or hunting humans, just peace and quiet while searching for clues to explain the mystery of who he is. Instead, Rand found himself ensnared by a sharp-tongued spitfire more than willing to provide a diversion.

Neither of them knew what a deadly creature she held in the palm of her hand.


Unhappiness tightened his jaw, creased his forehead. Nola had seen him angry, being a smartass, and God, the look on his face when he made love… Shit, only sex she told him. It was more, much more, but she would never tell him because Rand wasn’t the kind to settle down. She got the feeling only a little of his time was spent here or surely she would have run into him. The need to give him whatever solace she could for however long became overwhelming. She reached over and brushed his cheek with her fingers. “Sound like wonderful people.”


She snatched her hand away, folded it in her lap.


“No, no.” Rand grabbed it back, drew fingers to his mouth and sucked them one at a time. “I meant when you touch me it makes me hotter than hell. Feel this.” He moved her hand to the crotch of his jeans where he manipulated her fingers to squeeze and rub his growing hardness.


“…it wouldn’t happen again.” He ripped the sheet away. “Don’t hide from me.” Dragging her over to straddle his lap, Rand kissed her lips softly before peering at her. “Just sex, right? Lean back.” He let her butt slip between his thighs onto the mattress and he got on his knees between her legs. “One more time.”


Hope you enjoyed the excerpt!


Growl and roar-it’s okay to let the beast out.-J. Hali Steele
Posted by J Hali Steele at 5:23 AM No comments: