Lise isn’t surprised at how Ron, her husband, gazes at Keaton but she is damned surprised how hot it makes her! The very idea of Ron bent over a table, Keaton’s muscular frame draped over his body taking him hard, fast… Sheesh! Lise can’t breathe thinking about it. Now to convince Ron and Keaton to do what she wants and let her watch. That is another thing altogether. Putting wheels in motion is easier than she dreamed when Lise plans a men’s night of sports on TV and more—much, much more!
**Ménage with MMF**
Excerpt: 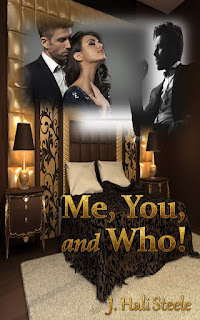 Finished with dishes, Lise moved to the doorway and heard her husband’s husky voice. “Hell, can’t believe he missed that.”
Keaton laughed, “He should have crowded him, right?”
“Stand up. Pretend to go for a shot and I’ll show you what he should have done.”
Pretending to dribble a basketball, Keaton turned left, faded right, and when he straightened to fake a shot, Ron stepped in front of him and jutted his hips into Keaton’s crotch. “Gotcha,” he yelled, hand high in the air blocking what would have been two points.
Damn. Lise watched her husband pressed against their muscular neighbor. Oh. My. God! Her panties grew wet and her heart pounded when it hit her. She wanted to see the men together, wanted to watch them fuck each other’s brains out. Lise barely resisted shoving her hand into her pants and fingering her pussy.
“Shit.” Keaton looked flustered. “Well, work early tomorrow so I gotta run.” He marched quickly to the door, opened it and looked over his shoulder, “Thanks for dinner guys.” The door slammed behind him.
Ron stared at the entrance then swiveled toward Lise, surely before he had time to think, because poking at the front of his slacks was one huge hard-on! “Uhh, hon, I’m heading to bed. Early meeting,” he mumbled. He dashed from the living room and she heard feet pound the stairway.
Lise had no intention of letting this moment get away. She was so hot and bothered she couldn’t breathe. Racing after Ron, she caught him entering their guest bathroom where he probably intended to hide out until he got himself together. She stopped him from closing the door. “Babe, talk to me.”
“It’s not what you think.” He couldn’t meet her eyes.
“You don’t know what I think.”
“Lise…”
She pushed the door wider, passed him and leaned against the counter. “I like what I saw. You don’t think I’ve watched him since he moved in a year ago? The man’s absolutely hot.”
“You’re freaking nuts.”
Grabbing his waistband, she pulled Ron closer, touched the front of his slacks. He’d grown softer but a bulge remained in evidence and jerked beneath her hand. “I see beauty in women all the time and it doesn’t freak me out.” She massaged until his cock grew hard again.
“Don’t.” His hand gripped hers, yanked it to his chest. “Look, I don’t know what happened down there.”
“I do, I think he’s one sexy bastard. Why shouldn’t you?”
“Christ.” One hand shoved dark hair from his face. “What the fuck, Lise. I’ve never felt anything like that with another man.”
“Feel me.” She unbuttoned her pants, drew his hand toward her and pushed it into damp panties. “I’m so wet, so turned on right now I want you to make me come.” His fingers slipped into the moist crease of her pussy and touched her clit. “Ron, I liked watching you with Keaton. I pictured him, you with him.”
“Fuck… Babe!” His breathing grew labored, fast as he yanked Lise’s slacks down and waited for her to remove them. Ron didn’t stop playing with her pussy but he left her yearning when he snatched his hand from between her legs to undo his pants. Shoving clothes off and kicking them away, he grasped his dick and slid it between her legs.
“Unnhhh, yes,” she moaned as it invaded her vagina. “Ron…Ron…” Lise hadn’t felt this alive or horny in months and all she could think about was how it would be to watch the two men screw. “You wanted him didn’t you?” Ron slammed his cock harder inside her, over and over until she was ready to explode. “Tell me. Let me hear you say it.”
Growl and roar-it's okay to let the beast out.-J. Hali Steele
Posted by J Hali Steele at 6:58 PM No comments: