Changeling's most popular CONTEST ever...

is back!!
This year, Changeling is giving away Free Books For A Year -- Times Four!

The best part -- there are no codes and no entry forms -- every $2.99 Sugarplum E-book purchased counts as a chance to win.

This year's Sugarplum lineup:
Sugarplum: Canine Christmas by B.J. McCall
Birthday gifts come in all sorts of packages and Joy Kingston's is a major surprise.

Sugarplum: Mutts by Sarah Black
When puppies appear outside his door, everything Matt believed about Christmas changes…

Sugarplum: Just Wink by Bryl R. Tyne
"What haven't I made clear? Desire. Ecstasy. Satisfaction. In that order!"

Sugarplum: Christmas in the Zone by Isabella Jordan
Two guys, two gals, and an aphrodisiac under the tree…

Sugarplum: Kitchen Witch by Dawn Montgomery
Sex, magic, and cookies… what a treat!

Sugarplum: Mistletoe by Amber Kallyn
What's a great way to spend a night with your mate? Indulge and make his body your very own buffet.

Sugarplum: Blitzened by Elizabeth Jewell
Can a carton of eggnog and a bottle of rum kindle a dose of Christmas spirit between Nick and Ian?

Sugarplum: Yuletide Spirit by Jessica Coulter Smith
The last gift Jenna expected on Christmas was two lovers who make her explore her sexuality.

Sugarplum: Bound for Christmas by S. Michael
Jenny's got the perfect present for her husband: a pretty boy toy, wrapped up with Christmas ribbon.

And now the fine print -- only we made it bigger.
* First Round winners and Finalists are eligible to win more than one prize
* Winners will be chosen from purchasers of books in the Changeling Press Sugarplum Series; each Sugarplum e-book purchase made in the month of December 2010 before the final prizes are announced counts as an entry.
* Prizes are available as Changeling Press E-books, to be downloaded from ChangelingPress.com only.
* Free book download links do not accumulate, and will expire if not used.
* Winners will be announced December 31st at the Changeling New Year’s Eve Party, held on our Changeling Press Readers’ Loop. 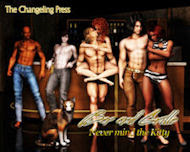 Growl and roar-it's okay to let the beast out.-© J. Hali Steele
Posted by J Hali Steele at 8:41 AM No comments:

Do you have any short pieces lying around that need a home? Something you have, but didn't know where to place it. Whipped Cream Reviews is looking for short (1000 - 1500 words), erotic romance fiction for their Thrifty Thursdays, where readers go and read for free ( http://tinyurl.com/nltnhp ). From first hand experience, I can tell you the exposure is great, and they give you a nifty cover too!
All genres are welcome as long as the story has strong romantic elements. Additionally, all the stories accepted at Whipped Cream MUST have love and romance as central -- it's not just about sex. A "Happy Ever After" (or at least "Hopefully Ever After") is also a required, fundamental part of all the stories they publish.

More information, including how to submit your story, may be found here: http://tinyurl.com/29p5gba

Growl and roar-it's okay to let the beast out.-© J. Hali Steele
Posted by J Hali Steele at 11:02 AM No comments:

I'm adding a Jimmy Thomas cover to my collection...I'm in love!! Thanks to Silver Publishing, and the very talented Reese Dante.

It's for Silver's 25 Days of Christmas anthology, which will be available in its entirety in print format. Each author's individual story will be released during December in eBook, and the cover will distinguish by color of the ribbon whether it's M/F (red ribbon) or M/M (blue ribbon).

I can't wait for everyone to meet Rad and Crayton--they'll be wrapped in a blue bow.

Celebrate the coming Holiday with both...

Rad and Crayton - the same yet different. They meet as often as possible throughout the year to be together. Christmastime is particularly special, it's when they celebrate their bonding. Mermen, one born in the south Caribbean sea, the other from the frozen waters surrounding Iceland--neither can exist for long in the other's climate.

Rad returns to his summer home in Pennsylvania, determined it will be the last time. The cold has taken a deadly toll on him. Cray can go no farther south, so they will have to give up their bonding celebration, and the Christmas holiday together.

Cray discovers a way to defeat Mother Nature, but it may already be too late.

Growl and roar-it's okay to let the beast out.-© J. Hali Steele
Posted by J Hali Steele at 6:27 AM No comments: 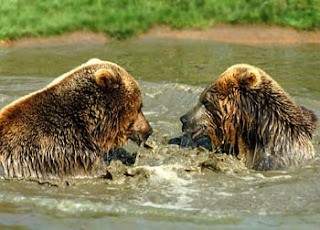 Hibernation time! Oh, it's so cold out...well, to me it's freezing. I'm a spring baby, I prefer summer temperatures, and it always goes too fast. I consider fall and winter a rest period. Going out in weather below 70 degrees doesn't thrill me. There's finding a jacket or coat that's warm enough, gloves, the whole dressing warmer thing eludes me. I seem to never have enough on!
Bears definitely have the right idea -- hide in a cave until the spring breeze blows!
Yet, I find the fall foliage has some of the prettiest colors. The reds are deeper, the oranges blaze like a fire. Yellow, the yellows are bright, vivid, and look so alive. I often look out my window and wonder, feeling like it does out there, how can it look so damn beautiful?
*Sigh* Me, waiting for springtime, flowers in bloom, trees opening their leaves -- nature taking a deep breath of fresh air, sending a warm breeze our way. 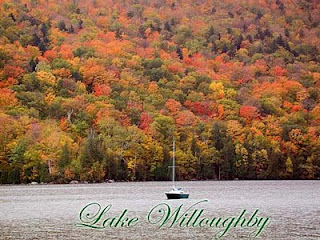 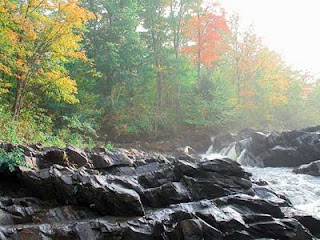 Growl and roar-it's okay to let the beast out.-© J. Hali Steele
Posted by J Hali Steele at 5:00 AM No comments: