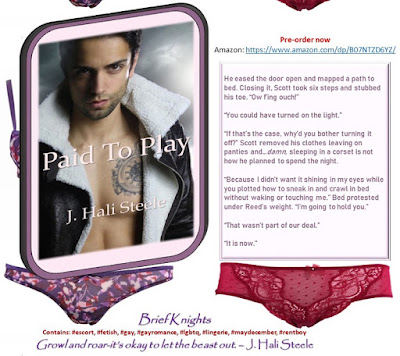 A bit of conversation:

Scott walked past his boss. Reaching outside, he spied another large man slouched against the same black car he’d seen today. Frowning, he sniped, “God knows what they feed you big bastards in Philadelphia.”

“For crying out loud; you want to see?” Scott unzipped his vest and pirouetted. “Want to feel me up?” He hadn't missed the gleam in Reed's eyes when he spun for Dan.

“Not particularly. Pants tight as yours don’t hide much.” Dan opened the door.

The man opened the door and Scott climbed in. Heard him comment to Reed, “Good luck with that one.”

Driver eased into traffic and Reed grabbed a bottle of Rare Breed bourbon from the bar compartment. “I take it from seeing pink above jeans this afternoon you like panties.” Pouring shots, he passed one to Scott. “Tell me, are those you’re wearing tonight the same color blue?”

“I can tell you where I bought them and how much you’ll have to pay for a pair if you’re interested.”

“The store’s name will suffice.”

Situation became more unbearable by the minute. “I’ll make sure you get it.”

Prick got on every one of Scott’s nerves. “Whatever.” And as suspected, Reed's eyes didn't miss a thing. He remembered the color panties Scott wore earlier.

Growl and roar-it's okay to let the beast out. - J. Hali Steele
Posted by J Hali Steele at 8:45 AM No comments: