Power or Love? Maybe both... 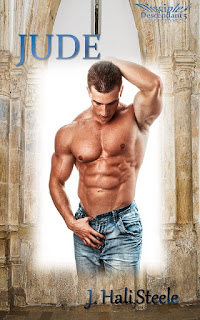 With whispered words, Thaddeus Jude holds the ability to control or kill most living things. The silken sound of his voice changes wars and worlds—but he can’t have Ethia. A Divinity warrior, she exudes pure lust, a feeling so overwhelming, no one resists her. Drawn to her flame as if a moth, Jude is determined to be the first to conquer Ethia, use her to slip uninvited into the Divinity’s circle.

Ethia must exact necessary information from Jude quickly. If he wins their game of cat and mouse, her ass might roast in Hell. However, the mean, sadistic bastard’s chords of beauty tug her ever closer, pull her nearer to an abyss there is no escape from.

Their stolen pleasure may bring a horrible death.


Taking his seat, Jude scrutinized Leviat. “The man bathed in light, the one who said he could kill you; who was he?”
“Why were you following me, Jude?”
“I happened upon two screeching creatures as I crossed Montana on my way home and wondered at the commotion.”
Leviat beamed. “You get all hot and bothered watching dragon’s fuck?”
Jude shrugged. “To kill dragons, the stranger would need to possess every power Gage has.”
“And?”
Zeb dealt cards deftly. “We are all aware of the Divinity, Jude. What’s your point?”
“Why don’t we have access to them?”
Riot and Leviat shoved their cards into the center pile and recited fold at the same time. Riot insisted, “You want to see what it’s like to know everything, feel all the pain and misery those unlike us suffer daily?” His fingers formed a steeple. “I can show you, Jude.”
“I don’t want that.”
“What exactly do you want?”
Jude examined Riot, saw no sign of the massive scar previously on his right cheek. Even though he appeared so seldom in their lives, Scariot portrayed no discomfort among the others. Each and every time he materialized, descendants accepted the man back into their elite group as if he’d never been away. Same courtesy was afforded that human, Ander. Damn it. A fish out of water, that’s how Jude felt. He’d never really spent much time with the other disciples as Gage used him most often. His power allowed him to leave much less damage than the others which Jude didn’t see as enough reason to make him a master killer. A pariah. Even among those that called themselves brethren. “How many people’s lives have you ended, Riot?”
“Then, now, or later this week?”
“Your devious ass probably doesn’t keep count.”
“Do you? If so, Jude, Why? I mean, to what end, man? We do Gage’s bidding. He’s in control, he deals with more shit than you and I will get a whiff of in five lifetimes.” He stood and pushed his chair in. Leaning, he spoke solemnly, “Know what else? It’s him who answers to a higher power when all is said and done.”
Riot spoke nothing but truth. Gage could more than likely end up sitting on Satan’s footstool. Jude had no idea when he started to expect more or what more encompassed. Sitting here, now, with these men was the closest he'd every come to feeling part of something. Nonetheless, uncertainty gnawed away at his gut. “Is what you have enough?”
Before Riot answered, he heard light steps approach. Ethia. Jesus, he already concluded she was a divinity warrior, a temptress enlisted to watch over him. How must duties she performed weigh on her shoulders? She used sexual wiles to plumb men’s minds and hearts. Did it bother her to know she stole secrets that might cause their demise? It brought him back to thoughts of Gage and those who controlled his leader. Just who was the Divinity and who the hell did they answer to?
“I can whip up something to eat if you guys are hungry.” He noted she now wore stretch pants with a tee and both molded to her delectable body. Jude scoured faces to make sure no eyes lingered on her perfect ass. Christ sakes, when did this feeling of guardianship take hold?
“I crave pizza.” Riot licked his lips. “You know, one with thin crispy crust, slathered with sauce, mounded with nothing but mozzarella and pepperoni.”
“What, no anchovies, sausage, onion, and olives?”
“Hell no. Start throwing all that shit on it, it’s not a pizza, Zeb, it’s a fucking casserole.”
Winking at the time shifter, Ethia had her cell phone in hand already. “A man after my own heart.”
Jude grunted. “I’m not hungry.” If she deigned to have Riot at her beck and call, that necessitated she think again. Mine. If another man touched her he’d sing them into oblivion. Fuck Gage and his tawdry talisman. He’d elevate his pitch so high, they’d override any gadget his leader designed to stop him. Jude detested feeling out of control and… And what? Goddamn it to hell! Angrily pushing from the table, Jude stood and left the room heading to the makeshift cage he’d been relegated to initially. Yes, he’d find a way into the Divinity. After all he’d done to help preserve mankind, Jude felt he deserved what he wanted.
Then he would possess the ability to have whatever he wished.
Strangely enough, at this moment, he’d settle for having their warrior beneath him.
Shoving through the bedroom door, he slammed it shut hard enough to jostle pictures on the wall. Everything needed shaking up. If her phone worked inside, so would his. Jude planned to add a few folks to the assembly. I leave you in charge of my home… And he intended to take full advantage of his tiny scrap of control. Sinalia resided outside and would, undoubtedly, come in the minute he closed his eyes to sleep. Let’s see how things flowed with Sim’s lady in the picture. Yeah, may as well add Ander and Pet to the mix. Surely, that would put everyone off their game having numerous flagrant females in close proximity. Damnation, still no phone service so he could call no one. How did hers work? Shit! No matter. The other’s ladies paled when compared to Ethia. That reminded Jude, he hadn’t only left powerful men downstairs, something much more desirable had been left behind. Medicinal ointment had not masked her scent.
Jude no longer smelled Ethia!

Disciple's Descendant Books 1-4 in the series available at Amazon 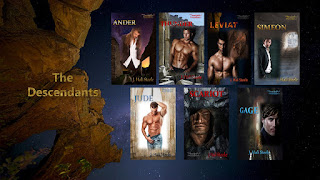 Growl and roar-it's okay to let the beast out. - J. Hali Steele
Posted by J Hali Steele at 8:36 AM No comments: