QUENCH
Coming to Ellora’s Cave May 2, 2014
Sequel to HARDCASE available for .99¢
Stay tuned for CONTEST information beginning May 2nd at SensuousPromos 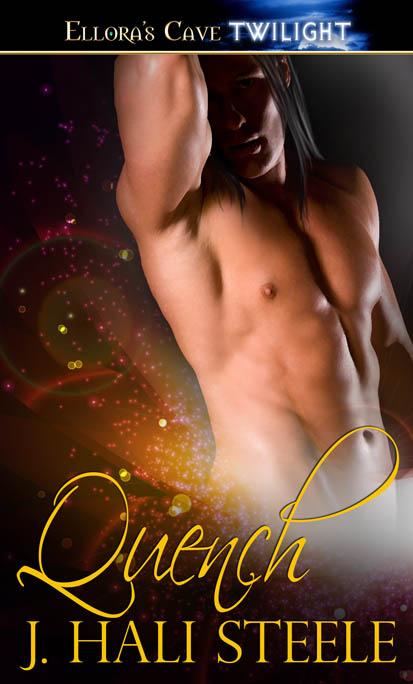 Alek is cursed. A tiger and lion mix, he also feels vampyre bloodlust. Finding a mate will require finding someone to sate that bloodlust and it has become increasingly clear that the two cats who live beneath his skin are outrageously, unbelievably picky. Then he meets Viviana, the one woman who ignites a fierce fire in his soul.

Viviana, a vampyre warrior, is shocked to come face-to-face with the one creature who can turn her cool blood into a molten river. Her powers stolen, she has to count on the cat for everything—blood, even her life, and when they’re together she becomes a wildcat in his arms. Viv wants Alek as her own, and no one, not even Alek himself, will stand in her way.

Excerpt:
It would be hours before the sun set and Viv rose.
His beast disappeared back into his body as soon as he entered the arena. The man’s body strode naked toward the house. Warm sandy soil sifted between his toes with each step. Normally he’d have clothed himself and bounded to the balcony but he wanted the sun on his skin, wanted to feel the breeze caress his body. He felt so freaking alive.
You’ve gone nuts.
Alek’s steps slowed. There was still the problem of needing royal sustenance yet gnawing thirst remained absent from his belly—and it scared the shit out of him. Another need blazed inside. Unlike the front of the mansion, the back door on the first floor of the house leading from the arena to the gym area always remained unlocked. His cock had risen like a barometer and pointed to the doorway he’d been heading to when suddenly it flew open with a bang.
Torn from his reverie, he jerked to a stop. Jesus, he needed to pay more attention to his surroundings and less to getting his dick wet.
Warriors stomped through the opening and came to a sudden halt, noses in the air.
“Uh, you okay, man?” one asked, taking an involuntary step back.
“Don’t I look okay?”
“You…smell sort of funny. Damn near like a lion.”
“Well, it’s me. And why are your asses late?” Should have clothed himself. He wouldn’t be feeling so stupid and vulnerable. Damn if he intended to do it now and skulk away.
The Reign shuffled from foot to foot, unsure of what to make of him standing there, cock flying in the air. His growl cut short a snicker from one in the back.
“You got something to say, boy, spit it out.”
“No sir.”
“I can’t hear you.” Alek was having a little fun. They were afraid of him. Not the kind of fear you have for your ex-leader. Their fear lay in not knowing exactly what he was. Fanfuckingtastic. “Get your asses out there. I see any slacking in practice, you’ll answer to me. Go,” he bellowed. His new sense of power overflowed and infected each of them as they scuttled by.
Yeah, he was different.
Alek felt like the king of beasts.
* * * * *
She sat up in the strange bed, the smell of sex surrounding her.
Alek was gone.
She was pissed off and her mind veered in every direction. She cleaned and clothed herself using her people’s magic. Searching far and wide around the grounds, she couldn’t feel the bastard.
Hell, she’d been with men both dead and alive. Alek was different. Hunger clawed and twisted her insides. Viv’s veins contracted, screamed for blood—his blood. “Lord, don’t do this to me.” She’d heard about this feeling.
No way the weirdass cat could be her mate.
Unable to dematerialize, she paced the floor and waited. When she got her hands on him she’d…
“What? You’ll do what?” Alek’s voice shook her to the core. It was as if warm honey drizzled over her cold, dead limbs.
He strode across the room from where she stood. “I like your hair out.”
Something was different, an air of superiority even worse than before shone from his eyes.
Viv’s nostrils flared at his new scent. Lion…and tiger. Both were so distinct she leaned into him sniffing loudly. Wonder replaced anger. He smelled like a goddamn lion. Shit, the stories were true. A Kind abomination already, a new mixture of monster stood before her. Three of the world’s most dreaded creatures rolled into one.
Tiger, lion and vampyre!
And the crazy fucker could walk in daylight.

Hope you enjoyed the excerpt!


Growl and roar-it’s okay to let the beast out.-J. Hali Steele
Posted by J Hali Steele at 11:00 AM No comments:


If you read the Thirsty series (from Razor’s Edge Press), you’ve already met Nolan, this is his story:


Utter three words – he can walk back into the arms of an archangel.


Nolan was Temperance; he gave all souls moderation in everything. He was good at it, and he called Heaven home until he screwed the wrong archangel! Now he wiled away time as a vampire slayer serving the devil, keeping an eye on Omen’s, a club for otherworldly creatures, and babysitting Lucifer’s son. Not a job he expected to hold for damn near eight hundred years. Nolan yearned to return home.


The next 3 begin a new series entitled Hellacious. Three brothers, identical triplets, and they are the sons of Satan!


Born in hell, he will destroy the pure heart he desires.


Sly Sathariel possesses his father’s genes and, on earth, he creates all sorts of havoc for humans, though he never takes life. Satan, his father, reserves that power, but not even his threat of ending Sly’s life keeps him from the arms of a pure and spiritual woman representing the Tree of Life. She entangled Sly in her roots, pulled him in a heavenly direction his soul dare not follow.


Waverly Malkuth has a premonition no human should be privy to – she witnesses her own death. It was tearing her apart, filling her with anger and thoughts of vengeance that went against the grain of everything she knew. Giving in to the malevolence growing in her heart carried her into the arms of a man who could only hurry her journey down the deadly path she followed.


Embracing a devious nature sets his heart and soul on fire.


Slick Sathariel, was Satan’s third born, and the youngest triplet. He always keeps the peace and makes everyone happy but himself. Not anymore. Slick is not about to tell the woman he desires that he may be responsible for her lover’s death. He sets out to heal her broken heart, and capture her for himself, but with his family’s prying, Slick may lose the one thing on earth he truly wants.


Marcia Carter spent an hour in the blue-eyed man’s arms and regretted it every day afterward. She had been in the process of extricating herself from an unhappy affair when the handsome stranger said something that caused Marcia’s boyfriend to attempt rekindling their long-dead relationship. Now she was available, and the man pursued her but Marci was not about to share her family’s millions with a poor bastard. One more time, maybe a night…


First born of Satan, and he wants to reign in hell!


Wicked Sathariel, the eldest son of Satan finally met his match, and at the oddest of times, she turned up in his head. Accustomed to having his father and siblings rummage through his mind, he couldn’t handle the woman seeing his hellacious thoughts. The only way to lock her out was to keep her in his domain, but Hell was not a place a human lived—unless they were dead!


Lori Thornton’s psychic ability was new and, never one to control her temper or her mouth, she often found herself in bizarre predicaments.  One such event was meeting Satan’s first-born and calling him a pretty boy. When his eyes filled with hellfire and he released horns, talons, and the long, leathery, forked tail that swung treacherously behind him, Lori knew her life was about to spin out of control.


Immortality comes at a price…


A Sovereign Spot Step Outside The Box
Growl and roar-it’s okay to let the beast out.-J. Hali Steele
Posted by J Hali Steele at 4:42 PM No comments: