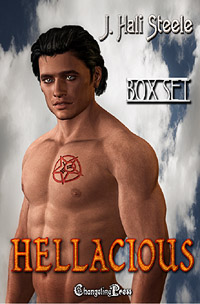 Is meddlesome at the worst of times and they often remain at odds. One thing brings them together - their triplets - Sly, Slick, and Wicked. To see what Josette gets up to, read the series!

They're all together in a box set at Changeling Press (THE BEST DEAL) also at: Amazon   B&N   Kobo   ITunes

Born of Hell, will he destroy the pure heart he desires?

Sly Sathariel possesses his father’s genes, and on Earth he creates all sorts of havoc for humans, though he never takes a life. His father, Satan, reserves that power, yet not even he could keep Sly from the arms of the pure and spiritual woman representing the Tree of Life. She entangles him in her roots, pulling Sly in a direction his hellacious soul dare not follow.

Waverly Malkuth has a premonition no human should be privy to -- she witnessed her own death. It’s tearing her apart, filling her with anger and thoughts of vengeance that go against the grain of everything she knows. Giving in to the malevolence growing in her heart carries her into the arms of a man who can only hurry her journey down the deadly path she follows.

Momma had a sense of humor. Said she named us after three of Daddy’s better traits -- Sly, Slick, and Wicked. She called us hellacious sons of bitches and Sathariel was the demonic surname she tagged us with in his honor. We were the sons of Lucifer himself, and since mother had been human, we were permitted above, as were other unimportant demons who wreaked havoc on Earth and its inhabitants. It was in our blood to take absolute advantage of every glorious moment, even though a blast furnace of heat followed us everywhere. Still, nothing rivaled the fires of Hell. And unbeknownst to humans, cold was just as bad because Hell froze over each time some asshole muttered the fateful words, “’till Hell freezes over.” Never lasted long but it would be so fucking cold a demon’s nuts could crack.
Guess God had a sense of humor too.
#######

Slick Sathariel is Satan’s third born, the youngest triplet. He keeps the peace and makes everyone happy but himself. Not anymore. Slick can’t tell the woman he desires his family may be responsible for her lover’s disappearance, or that he’s the devil’s son. But when he sets out to capture her for himself, his family’s prying just might cause Slick to lose the one thing on Earth he truly wants.

Marcia Carter spent an hour in a handsome stranger’s arms and she’s regretted it every day since. She had been in the process of extricating herself from an unhappy affair when jealousy made her ex attempt rekindling their long-dead relationship. Now she’s available, and the blue-eyed devil is pursuing her, but Marci is not about to share her millions, or her body, with another poor bastard. Yet getting him out of her mind won’t be easy. Maybe one more time, one night…

“Jealousy is an ugly monster, my sons.”
Slick jerked around, surprised as hell his mother had crept up on them.
“I do not creep, Slick.”
“Oil and water didn’t mix again, huh?” Wick peered at their mother, Josette. “How do you deal with loving the devil?” Satan was not an easy man to live with. Hearing a burst of laughter, Wick twisted back to the women. “Looky, looky, Slick.”
Slick watched the new arrival take off her sweatshirt, then carefully fold and lay it beside the pile of clothing and wraps already strewn about. He’d joined his brother at the park because Wick wanted to keep his eye on the nurse he’d had the run-in with at the club, but Slick never expected her to show up.
“I can’t watch this,” he groaned.
The woman from the club, the one whose legs he had spent a glorious hour between in an SUV, the one he desperately wanted… Yet he’d given her boyfriend the key to her heart… and her pussy. Damn it. Last thing he needed was to watch her bend, stretch, and sweat. Her scent already reached his nostrils. Any more and his dick could double as a flagpole. “What. An. Ass.”
His brother laughed. “And it’s free now.”
“What! When?”
“Easy, man. I was going to tell you.” Slick wondered, only briefly, why his older brother glanced at their mother. “You wished he was gone, right?” Wick shrugged. “Maybe he’s dead. Do you really give a shit?”
Slick glared at his older brother. “Yeah, like when Hell froze over you would tell me. Bastard, what did you do?” The sand shifted beneath his feet, grew icy-cold, causing him to levitate a few inches. “Fuck me.” Uttering the words “Hell froze over” would keep his father’s walls glacier-thick with ice for a few hours.
Genuine laughter bubbled from his mother’s lips, evidence she liked what her baby boy had done. “I’m borrowing your brother, and please, don’t irritate your father, Slick. I left him rather happy.”
#######

Wicked Sathariel, the eldest son of Satan, has finally met his match, and at the oddest of times, she turns up in his head. Accustomed to having his father and siblings rummage through his mind, he can’t handle his woman seeing his hellacious thoughts. And when it becomes clear she’s heaven bound -- all hell breaks loose!

Lori Thornton’s psychic ability is new, and never one to control her temper or her mouth, she often finds herself in bizarre predicaments. One such event is meeting Satan’s firstborn and calling him a pretty boy. When his eyes fill with hellfire and he releases horns, talons, and the long, leathery, forked tail that swings treacherously toward her, Lori knows her life is about to spin deliciously out of control.

“For crying out loud. You did it. Why, why did you let her see into my mind?” Sometimes tenderness and love dripped from the fingertips of his father, especially when he dealt with his sons. This was one of those times. He touched Wick’s cheek with his hand and love poured into him, but the most horrific thing he could imagine quickly followed. The vision overwhelmed Wicked, took him to his knees. “Hell, no… no!” His pain expanded, entered every part of his body, and instantly his brothers were at his side.
Sly spoke first. “Easy, man, easy, we’re here.”
Slick helped him to his feet. “I’m sorry, Wick, so sorry.”
They had witnessed the vision also. He stood and glared at his father. “It won’t happen. I won’t let it.”
Satan opened the gates of Hell and walked inside the door. Pivoting, he gazed at Wicked with red tears staining his cheeks. “It will happen.”
“Fuck you.”
“Wicked!” Josette stood behind him and put her arms around his waist. “He’s your father.”
Glaring at the doors as they slowly shut, he cried, “He’s the goddamn devil, nothing more.”
Walls trembled throughout the bowels of Hell, the gates flew back open, and Satan in all his hellacious glory tramped back into the room. Horns glistened, talons appeared longer than usual, and the long, leathery tail whipped high and low scoring the walls with gouges. “You didn’t think being mine meant sweetness and light, did you, Wicked?” Satan snatched Wicked from Josette’s grip and the talons tore into his flesh. “Did you?”
Wick lost all control. His horns sprouted, followed quickly by talons as pointy and deadly as Lucifer’s. A thick, spiked tail waved around the room, sending his brothers and Josette scurrying into the far corner. Fire flicked from his mouth when he spoke. “Release me. I’ll show you evil.”
Satan laughed, an eerie sound, which gave Wicked pause after he was dropped and his hooves hit the floor. “I made the right choice when I chose you.”
“I could have told you that, Pops.” Sarcasm laced every word.
“What do you think you’re going to do?”
“I’m not going to let you hurt her.”
His father chuckled. “I’m not going to hurt her.”
Wick breathed a sigh of relief.
“Don’t you ever come against me again. And in my house?” Satan opened his mouth and a blast furnace of flames licked at Wicked, causing him to back up. “You are much stronger than your brothers, but I can still burn your ass behind the gates of Hell forever.” He wrapped his tail around Wicked and flung him to the floor. “Do. You. Understand?”
Wicked refused to give an inch until his brothers drew near and he feared for their safety. “Stop, I’m okay.”
Stepping back through the heavy, impenetrable doors, his father smiled. “Wicked, you are firstborn, you are mine, and you will kill her, not I.” Sadness rested in his eyes as he glared at him. “This is what it’s like to reign in Hell, my son. Get used to it.” He looked up. “She belongs to Heaven.”