I adore, positively adore, Mariska Hargitay, @mariska, both as an actress and a person. 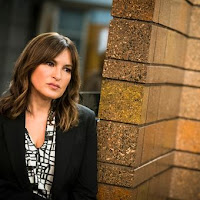 She's had ups, downs, and comes out on the right side every time. Each of those times, I watch her grow, change to be what her role calls for. Detective, lieutenant, or WOMAN.

Yeah, the right side of law, including when she beat the hell out of her rapist, Billy, in, I think season 15. Did I want her to kill him? Yes. But I'm glad she didn't. She's better than that. Sure wish Fin, Belzer, or one of the others would have accidentally shot his ass or something. I feel her acting in this episode was phenomenal! Of course, I saw the rerun a few weeks or so back. I still moved to the edge of my seat while watching. The show's star gets that reaction from me because she played the hell out of that week's part--and most other episodes I've been fortunate to view.

Actor, Peter Hermann, (a hottie in his own right @peterhermann) nabbed a jewel when he caught her because this woman, in my eyes, is a gem! See wife/husband together in a Youtube clip from L and O SVU:  regarding her adoption of baby Noah. Never saw her and Stabler as more than partners but, damn, these two, as police officer and lawyer--they could have worked as occupations were just far enough apart to understand and sympathize with each other during trying times.

I watch this when original episodes air on NBC and I've probably watched every episode 3-4 times on Ion TV or USA Network. I don't have a photographic memory so each time I see her in episodes it reminds me why I continue to follow Law and Order: Special Victims Unit.

This all leads up to saying Mariska Hargitay is up for 44th People's Choice Award for Drama TV Star - not female in a drama but DRAMA TV STAR! Damn if it shouldn't be hers when I look at others in the category. Not saying they are not good at their craft, but in my humble (or not so humble) opinion, she is great. My fingers are crossed. It's the only award show I still watch.

Who do you hope wins an award in their category?
Hmm, is there a prize for someone responding?