The group being interviewed today not only became friends, they are each other’s confidants. The men affectionately refer to themselves as femscorts. Young, slender, effeminate, outspoken, extremely fond of women’s lingerie, and enamored of older men. All three work for Brief Knights, an agency contracted by wealthy men seeking companionship for trips, special events, and sometimes to stave off loneliness. They’ve been gathered by author, J. Hali Steele, to talk about various adventures experienced during time employed at Brief Knights. 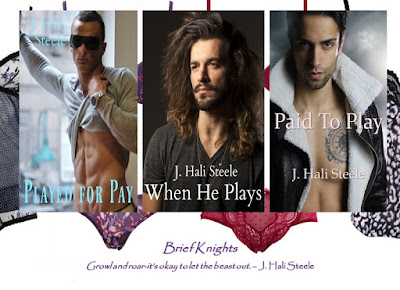 Banyon Jameson walked into the spacious room and glanced around. Appeared to be an office and only two other people had arrived. His best friend, Hunter Gold, and a good friend of both him and Hunt, Scott Ketchum. The author who called them together was nowhere in sight.
“I don’t have all day.” Always vocal, Scott questioned, “Where is this lady?”
“Guess she’ll be here soon. Not like you have anything important to do.” Hunt poked through stacks of clipped pages. “She writes a lot.”
“About what?” Ban joined in perusing packets. “Good Lord! This is about me.”
“You’re kidding, right?” Hunt snatched it. “Played for Pay.” He glimpsed a few pages then peered at Ban. “Jesus! It’s your life story.”
“It can’t be my life story. I’m alive and, sweet peter, I hope I have some living left to do.”
“I know you hate vulgarity but why don’t you just say suck my dick?” Hunter glared, “Had no problem cursing when you sent that message with Scott calling me names.”
Banyon grinned. “You didn’t like being told ‘pay back is a bitch’?”
“I didn’t like you calling me a motherfucker.”
“Exactly what you were when you engineered that meeting between Stanton and myself.” He didn’t expect his best friend to betray him. “It was wrong.”
“Was it? Seems like I was responsible for you finding the love of your life.”
“Doesn’t matter, Hunter. You should have told me he was going to be at the party so I could…”
“Could what? Refuse to attend? Where would you be now if I’d told you?”
Stanton Kavanaugh had become Ban’s partner. “Fudge nuts, you’re right.” Leafing through another pile, he exclaimed, “Hah, hah!”
“Find something interesting?” Hunter reached for the fastened pack Ban held. “When He Plays. Son of a bitch, this woman is prolific.” He slammed it to the desk. “I don’t care what she writes about me but Weston Tucker is hands off.”
“The hell he is.” Scott had a sheaf of papers in hand. “Everyone should know about the dude’s crotchety, disdainful, mean ass.”
“Fuck you. And don’t call him dude.”
“He does hate that.” Scott plopped into a big comfy chair and threw legs over one arm. “Does he dribble paint on you in his secret studio?” He grinned. “Bet Wes drapes that tight little body of his over your big ass and gives it to you the way we all know you like it.”
“God's sake, shut up!”
“Oh, like the world won't know now? It's written in black and white.”
“Kiss my ass. So what if I like being on the receiving end. You’re jealous she penned nothing about you.” Hunt groaned, “We may never. Look at all the manuscripts on those shelves!”
“Don’t like having your dirty laundry aired before the world, Hunter? Pay back and all that.” Banyon snapped his fingers as he considered Scott who had grown quiet. “What are you reading?”
“It’s called Paid To Play.” He quickly flipped pages. “About me and Reed Chandler.”
“Is something the matter?” Hunt walked to where Scott sat. “Christ, if you’re going to wear one of those studded, goth kilts, keep your legs closed. No one wants to see your pierced junk.”
“Junk? Shit, a prize hangs between these thighs and it is covered in the finest silk panties. Bought them yesterday at a shop on Rodeo Drive. You should see the lovely corsets they stocked in every color.” Scott never took his eyes from pages he rapidly turned. “I’m not sure I like this J. Hali Steele.”
“What’s up?” Ban joined Hunt beside Scott’s chair.
“I don’t mind she’s not letting me have sex yet but, damn her!” He threw the pile to the floor, clip fell away, and papers skittered in every direction.
Ban grabbed sheets and began rearranging them in numerical order when he saw the paragraph Scott must have read. He studied his friend who stared out a small window. “Sweet peter, I’m sorry, Scott.”
Hunt snatched the single page and read the following conversation from Paid To Play out loud—
“Reed, you’ve convinced yourself you want something that you truly don’t. I know you better than anyone and he’s not your type.”
“Nothing about me is your business anymore, Shel. You walked away.”
Shel stroked a finger down Reed’s face. “I’m back, baby.”
“Damn, Scott, this means you may not get an HEA.”
“Reed contracted my services for a month.” Scott jumped from the seat. “There are three weeks left.”
Ban sighed. “Seems Reed and Shel had a long relationship.”
Scott strode to the door and stared over his shoulder. “J. Hali Steele hasn’t written THE END yet.”