Brief Knights is an escort agency chocked full of hot men for men! I currently have 3 stories in the series and we'll see how it goes. My plan is to role all 3 out in the next 3 months. But you know the saying: The best laid plans of mice and men... Following cover stories/teasers may change before publication: 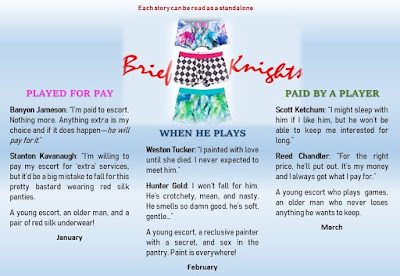 
“I’m paid to escort. Nothing more. Anything extra is my choice and if it does happen—they will pay for it.”

Banyon Jameson loves his lifestyle. He likes money, makes lots of it as an escort, and he enjoys time with a variety of men in beautiful places. Ban, twenty-six, prides himself on being manipulative with an ability to talk his way out of most situations, especially those involving sex.

“I’m willing to pay my escort for ‘extra’ services, but it’d be a big mistake to fall for this pretty bastard wearing red silk panties.”

Stanton Kavanaugh, late forties, extremely wealthy, and told he’s handsome. Those very close know he’s gay, Stanton just doesn’t advertise it to the world. None have knowledge of his predilection for young, beautiful men. Single, eligible, he pays for companionship to ease loneliness engulfing his life and it works until Banyon Jameson answers his phone call to Brief Knights.


A young escort, an older man, and a pair of red silk underwear!

WHEN HE PLAYS - February


“I painted with love until she died. I never expected to meet him.”

Weston Tucker overhears a young man lament finding adequate living space or having to return to his father’s home. Wes notices perfectly manicured fingers pull out a credit card few can name on sight alone. Young and far too handsome, Wes thinks to knock the evidently spoiled brat, whose family name he recognizes, down a peg or two. With paint stained fingers, he proffers his card offering a room in return for having the inside of his home painted.

Hunter Gold’s job as an escort for Brief Knights has to end or his father threatens to cut him off. At the same time, his roommate leaves Hunt in a fix for housing. A few more escort assignments are booked but he takes on a job painting for a recluse to have a place to live and a small salary until he can straighten things out and find a real job. Hunt never dreamed of becoming enamored of the enigmatic loner.


A young escort, a painter with a secret, and sex in the pantry. Paint everywhere!

Scott Ketchum has never found anyone who keeps him interested for long so he continues to work as an escort for Brief Knights hoping to snare a man who will care for him in ways he’s only dreamed. Not as soft as he looks, he’ll pamper his client, and Scott’s not interested in being on top. Ever. Problem—he’s bossy as hell and won’t take any crap.

“For the right price, my escort will put out. It’s my money and I always get what I pay for.”

Reed Chandler got where he is through grit and cunning. When he moves to Los Angeles to oversee an acquisition purchased on a whim, he found himself surrounded by a gaggle of blond, muscled beach bums looking for an easy way up. Realizing his stringent requirements for a partner will never be met, he books a professional escort for a month, someone who will put out if the price is right. After all, it’s his money and Reed always gets what he pays for.


A young escort who plays games, an older man who never loses anything he wants to keep.

Growl and roar-it's okay to let the beast out. - J. Hali Steele
Posted by J Hali Steele at 5:51 PM