I believe it's ended. One story started and stopped, another refuses to be written, so I took needed time off. I don't know about other authors but I sometimes wake up with a full blown story brewing faster than percolating coffee in my head! Trick is getting the main plot in black and white quickly! I hope this one continues to move along as nicely as it started. A small taste below, the cover story, and it will probably go through a few transitions as the story takes shape. The cover tells quite a bit!


NOTHING LEFT OF ME


Beauty is not fleeting when worn by an immortal. 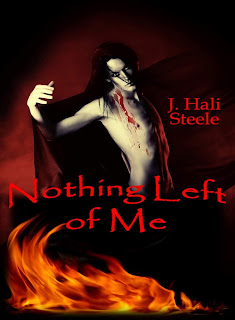 Brax Sevan rules immortals populating earth; wily creatures humans attempt to ridiculously explain away with childish tales of boogeymen or ghosts. Brax and his underlings see to annihilation of beasts who become careless and those who defiantly flaunt rules. Boredom sent him to delve into why, and how, one of his kind killed a powerful subordinate. What he finds sways steadfast objectivity, strips him of calm reserve and aloofness honed over many lifetimes. The individual starts a fire in Brax that will not be suppressed and what he does next may cost his powerful position leaving people vulnerable to blood thirsty monsters.

Cador Ridge spent hundreds of years as a consort to emperors, kings, powerful men from every walk of life, but he bows to no one. Then or now. His existence, though sometimes rife with loneliness, is perfect until another like him dies at Cador’s hand. Running was useless as there is no place to hide from those the self-appointed leader of supernatural beings would assemble to find him. He doesn’t expect the supreme one to pay a personal visit. Nor did Cador believe the contemptuous bastard would take everything—but his life!

Growl and roar-it's okay to let the beast out. - J. Hali Steele
Posted by J Hali Steele at 8:50 AM