It's Thursday, so I'm going back in time.

Box set available at:
Amazon and Changeling Press (where you'll find links to all outlets) 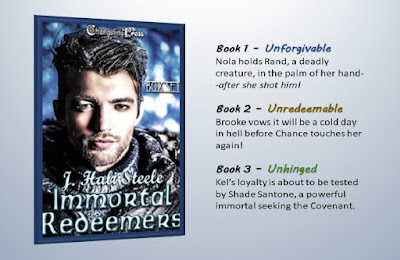 
Not even love could tame the deadly creature inside him.

Nightshade Santone discovered the Covenant right under his nose in the eastern part of the United States. Tales were told of its power, and Shade plans to make the book his. He doesn’t count on a feisty veterinarian getting in his way. The sexy-as-hell human willingly takes Shade to her bed, and damned if she isn’t keeping him there! Now, more than ever, he needs to possess the book and its secrets.


Kelsea Arden’s battle to keep animals safe and alive became a passion. One of a handful of humans privy to the secrets of Immortal Redeemers, she finally hoped to make a difference, but the untimely arrival of Shade Santone, a powerful immortal seeking the Covenant, is about to test Kel’s loyalty. The Redeemer not only unbalances her heart and her life, he gives Kelsea a new purpose -- capturing and keeping the raptor forever.